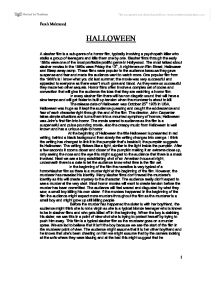 Halloween. At the beginning of Halloween the title Halloween is presented in red writing, behind a black background then slowly the writing changes into orange.

HALLOWEEN A slasher film is a sub-genre of a horror film, typically involving a psychopath killer who stalks a group of teenagers and kills them one by one. Slasher films through the early 1980s were one of the most profitable prolific genre in Hollywood. The most talked about slasher movies in the 1980s were Friday the 13th, A nightmare on Elm Street, Halloween and Sleep away camp. These films were popular to the audience because they gave suspense and fear and made the audience want to watch more. One popular film from the 1900's is I know what you did last summer; the movie was very successful and appealed to everyone as there wasn't much gore and blood. As they were so successful they made two other sequels. Horror films often involve a complex set of codes and convection that will give the audience the idea that they are watching a horror film. In every slasher film there will be non diegetic sound that will have a slow tempo and will get faster to built up tension when the murderer is about to kill. ...read more.

The audience really didn't expect to see a murder at the very start. Most horror movies will want to create tension before the murder has been committed. The audience will feel scared and disgusted by what they saw, a small boy killing his own sister. If the murders happened in the beginning of the film the audience might expect more murders throughout the film as the murderer is a small boy and might grow up still killing people. Before the murder has happened the sister is with her boyfriend, the audience might think she is not a virgin as she is a typical blonde teenager who is known to be in slasher films and who gets killed off in the beginning. When the boy is stabbing his sister, we see this in a point of view shot she is trying to protect herself by trying to push him away. This film is a typical slasher film as the murderer goes on a murder spree. ...read more.

There is diegetic sound, breathing where the murder has put his mask on, footsteps where the boy is walking up the stairs towards the bedroom, stabbing noises where the small boy is stabbing his sister, children taking to one another outside as they are knocking on door to get some sweets as it is Halloween, the girl screaming and the boyfriend and the girl laughing, also there is non diegetic sound when the boy is spying on his sister, the music is a slow tempo at the start then goes faster and then comes a continuous note when he's coming up the stairs until the murder is happening then it stops. The diegetic and non diegetic sound will have a huge affect the audience be the girl screaming while she is being stabbed they will be shocked and the non diegetic will make their heart pound faster waiting to see what happens next. The narrative of Halloween is a psychopath called Michael who has escaped from a mental hospital and goes on a murdering spree killing babysitters. ?? ?? ?? ?? Farah Mahmood 1 ...read more.