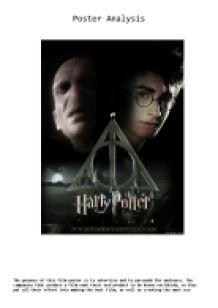 ﻿Poster Analysis The purpose of this film poster is to advertise and to persuade the audience. The companies that produce a film want their end product to be known worldwide; so they put all their effort into making the best film, as well as creating the most eye catching and interesting film poster. They make a film poster to persuade more people to come and see the film, and so earning more money. The film companies need to get the most money they can so that they can earn back the money spent on making the film, as well as the payment of the actors/actresses and the rest of the staff. The genre of this film is fantasy, adventure, action and thriller. It is targeted for people of any gender and for people aged 12-40. ...read more.

In the background, there is the bright shining moon hidden behind some grey clouds, the Hogwarts school/castle, some rocks and water, lit lamp posts and a starry sky. The dark starry night and the moon suggest that the majority of the film may be set in the night time, or the film just has a dark feel to it. The clouds signify that there may be a dark and mysterious secret hidden within the film. The lampposts tell us that in the dark, the characters might be given some help. The rocks and the water tell us that the characters may come across an environment like this. The Hogwarts school/castle tells us that this building plays a big part in the film, the way all the lights are on in the castle suggests that the castle would be ?alive? and active during the film. ...read more.

There are no taglines, quotes or actors names in this poster. But there is a web address advertised on the bottom, by putting in a web address the website would become more successful and the company will earn a little more money. To conclude, I like the way this poster is laid out and the chosen images put in. This is because the poster does not tell us everything about the film, only some information is given and this leaves questions in my head. I think it was good to put Voldemort and Harry Potter in the poster as this shows there might be conflict between the two. The object in the middle is the very important information in the poster because the whole film is based on the findings of the different parts to it and if it is not there, then this does not really tell us much about the film and what it is about. I think this film will be very interesting and successful. ...read more.