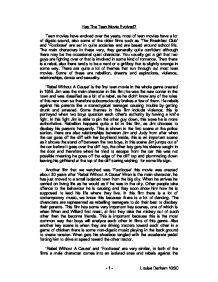 Has The Teen Movie Evolved?

Has The Teen Movie Evolved? Teen movies have evolved over the years, most of teen movies have a lot of digetic sound, also some of the older films such as 'The Breakfast Club' and 'Footloose' are set in quite societies and are based around school life. The main characters in these vary, they generally quite confident although there may be the occasional quiet character. You usually get a girl that two guys are fighting over or that is involved in some kind of romance. Then there is a rebel, also there tends to be a nerd or a girl/boy that is slightly strange in some way. There are quite a lot of themes that run through out most teen movies. Some of these are rebellion, dreams and aspirations, violence, relationships, dance and sexuality. 'Rebel Without A Cause' is the first teen movie in the whole genre created in 1955. Jim was the main character in this film; he was the new comer in the town and was classified as a bit of a rebel, as he didn't know any of the rules of this new town so therefore subconsciously brakes a few of them. ...read more.

This film has some very important key scenes, one of which is when Wren and Willard first meet, at first they take the mickey out of each other then the become friends. This is important because this is the most common way that boys will analyze each other in films of this genre. Also another key scene is when they are driving tractors toward each other in a game of chicken there is some non-digetic music playing in the back ground to create tension. Wren gets his shoelace tangled with the accelerate pedal forcing him to drive at speed toward the other tractor. 'Rebel Without A Cause' and 'Footloose' are very similar, in both of the films a male character comes into an isolated area and rebels against the rules set, parents and the law. The way the boys meet other boys in both films is very macho and testosterone fuelled. A main similarity with in the films is when they are racing/ playing chicken in both films a person is restricted by an item of clothing, which prevents them from escaping the vehicle. In 'Rebel Without A Cause' the villain gets trapped in the car door by his sleeve and in 'Footloose' Wren gets entangled in the peddle which forces him to keep going not allowing him to brake free. ...read more.

The music in this film is mainly digetic due to the music in the club where she works or her singing. An important scene in this film is when she applies to become a coyote. This is because who she is as a person when she frustrated and then starts to question why she has not been given the job immediate this shows her determination to be somebody. This film is very different to the rest of the films, as the main features of the traditional teen movie have been changed to create a more modern and realistic film. The similarities between the films are that they are all trying to make something happen to create a more fun and appealing environment for hem to live in. In answer to the essay question I think that the teen movie has evolved over the years. The range of films has proved this that we have watch, it shows that the films have changed over time just like teenagers have evolved to become who they are today. If they had not evolved over the years they would of lost the minds of teenagers today. ?? ?? ?? ?? - 1 - Louise Derham 10SC ...read more.