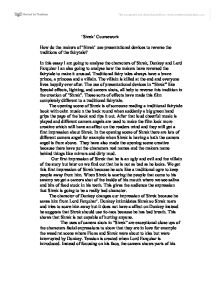 How do the makers of Shrek use presentational devices to reverse the traditions of the fairytale?

'Shrek' Coursework How do the makers of 'Shrek' use presentational devices to reverse the traditions of the fairytale? In this essay I am going to analyse the characters of Shrek, Donkey and Lord Farquhar I an also going to analyse how the makers have reversed the fairytale to make it unusual. Traditional fairy tales always have a brave prince, a princess and a villain. The villain is killed at the end and everyone lives happily ever after. The use of presentational devices in "Shrek" like Special effects, lighting, and camera shots, all help to reverse this tradition in the creation of "Shrek". These sorts of effects have made this film completely different to a traditional fairytale. The opening scene of Shrek is of someone reading a traditional fairytale book with calm music n the back round when suddenly a big green hand grips the page of the book and rips it out. ...read more.

Tension is created when Lord Farquhar is introduced. Instead of focusing on his face, the camera shows parts of his upper body and his feet. This suggests that he is an important part of the film. The viewer also sees close ups of him walking with his chest out proudly. Low angle shots are effectively used to show Lord Farquhar looking down on Shrek and Donkey whereas in the tournament scene they show Shrek looking up to Lord Farquhar who is sitting high in his seat. Mid angle shots are used to show both of the characters at the same time and show romance and bonding. For example when Shrek and Donkey are relaxing together, and when Shrek has cooked Princess Fiona a meal. Sometimes, a character's back is shown rather than their face. This suggests isolation from other characters. For example when Princess Fiona leaves Shrek and goes inside the cave. ...read more.

The music is always significant to the situation. For example at the beginning of the film when we hear a fairy tale being read through the pages of a book with soft music in the back round. When suddenly we see Shrek's hand rips the page. Then we hear a toilet flush, this suggests that Shrek used the page as toilet roll here we have an immediate mood change and the music is now a lot more cheerful and lively. The film makers have reversed what is a traditional 'Disney fantasy' into a funny and message giving film. They have revealed that not all ogres are evil as throughout the film we can see that nobody is intimidated by Shrek even if he is an ogre. We also learn that not all princes are good and caring as in the film we quickly learn that the Lord Farquhar is not a traditional prince but is selfish and evil. The message that the film gives to us is don't judge people by the way they look or act. By Madiyah Imtiaz ...read more.