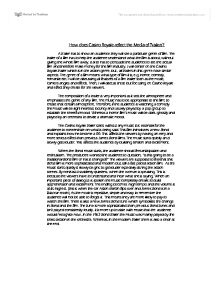 How does Casino Royale reflect the Media of Trailers?

How does Casino Royale reflect the Media of Trailers? A trailer has to show an audience they will see a particular genre of film. The trailer of a film has to help the audience understand what the film is about, without giving the whole film away. It also has to persuade the audience to see the actual film and therefore make money for the film industry. I will center on the Casino Royale trailer which is in the action genre, but, all trailers in this genre have similar aspects. The genre of a film means what type of film it is, e.g. horror, comedy, romantic etc. I will be discussing all features of a film trailer such as the music, camera angles and effects. Then, I will discuss these but focusing on Casino Royale and effect they create for the viewers. The composition of a trailer is very important as it sets the atmosphere and emphasises the genre of any film. The music has to be appropriate to the film; to create that certain atmosphere. Therefore, if the audience is watching a comedy the music will be light-hearted, bouncy and usually played by a pop group to establish the cheerful mood. ...read more.

Here this woman is finally recognised as the Bond girl or the 'damsel in distress.' The audience feel apprehensive and uneasy wondering what will happen to her and whether Bond will save her. One more close up angle shot proceeds. James Bond is dressed in casual clothes. He seems upset and has a stern feel to him. He appears to be containing a fierce rage and the bright sparks in the background are the only source of light. The viewers begin to question Bond as it appears he is walking away from the plummeting building, suggesting he has already admitted defeat. Here, the audience realise how different this James Bond film is. The viewers start to believe Bond has been disloyal as he has given up. Another tracking shot is used. This is back in the building; the lift is sinking out of control into water. It's shadowy and mysterious, the darkness insinuates death. The viewers search for Bond and the girl in a tense and frantic way as something exciting is happening. A wide angle shot is used afterwards. This is a still shot of scenery, from one side to the other. It can be used to create a sense of space for the audience. ...read more.

In the Casino Royale film trailer, there are four captions, these are at the end of the trailer. Firstly, there is 007 written vertically on the screen, then it changes into 'Casino Royale' and the '7' becomes a gun. Thirdly the title changes into another '007' but the '7' is still a gun. Lastly the '007' transforms into the 4th of November (the release date) and the seven is still a gun. The first caption is written in a luminescent white with a cloudy surrounding, which fades into black. The music then stops. All the other captions are written in a bright white with a jet black background. Black as a background symbolises death, this implies Bond died in the car crash. I think camera angles, exciting music, memorable catchphrases and significant captions make an excellent film trailer. The purpose of a film trailer is to help the audience understand what the film is about, I believe the Casino Royale film trailer has achieved all of these key elements. It has captured the audience's attention and therefore persuaded them to go and watch the film. Normally, I wouldn't watch James Bond films or action films in general but, after watching this trailer I have been tempted to go and see the film. Because of the enthralling images and music. Leena Halim ...read more.