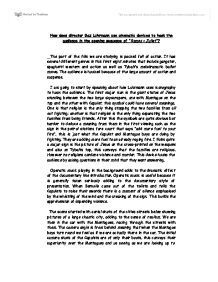 How does director Baz Luhrmann use cinematic devices to hook the audience in the opening sequence of Romeo + Juliet?

How does director Baz Luhrmann use cinematic devices to hook the audience in the opening sequence of "Romeo + Juliet"? The part of the film we are studying is packed full of action. It has several different genres in this first eight minutes that include gangster, spaghetti western and action as well as Tybalt's melodramatic ballet moves. The audience is hooked because of the large amount of action and suspense. I am going to start by speaking about how Luhrmann uses iconography to hook the audience. The first major icon is the giant statue of Jesus standing between the two large skyscrapers, one with Montague on the top and the other with Capulet; this symbol could have several meanings. One is that religion is the only thing stopping the two families from all out fighting; another is that religion is the only thing separating the two families from being friends. After this the symbols are quite obvious but harder to deduce a meaning from them in the first viewing such as the sign in the petrol stations fore court that says "add more fuel to your fire", this is just what the Capulet and Montague boys are doing by fighting. ...read more.

This device works well because it can show superiority of a person. For example Abra fills the screen whereas the two Montague boys together don't fill the shot. This gives us the impression of Abra being a more aggressive, dominant character. This sequence relies heavily on setting so as to create an atmosphere of fear and suspense. The film starts with a TV screen right at the back of a black room; because the room is black it focuses our attention on to the screen. The camera zooms in closer to the screen and we go into it, as if we are going inside the story. Before we arrive at the petrol station there is a preview of what we are going to see in the movie and it introduces some of the characters. This preview has large parts of it taken from a camera in a helicopter, giving us the feeling that we are going to watch the story as it unfolds. The main part of this sequence is set in a petrol station. ...read more.

Finally Luhrmann shows the authority of captain prince over the two families by taking a shot that looks up to him in the helicopter making him seem very big. This is also emphasised by a close up that follows. The effect this has on us as the audience is that we feel small. This helps us to imagine how Benvolio and Tybalt feel surrounded by helicopters and armed police. The opening scene is fast and impressive. The modern setting helps the modern day audience understand Shakespeares' dialogue. Luhrmann is successful in hooking the audience because of his use of setting and drama. I think one of the main reasons you to continue watching is because of the action and the use of music/sound effects. However even if there was no sound you would still be able to watch the movie and understand it fairly well because of the over dramatic technique used. This is useful for people who may not understand the language that the original script was written in. In all I feel this opening sequence was a success in hooking the audience because of its accessibility to all age groups and all levels of intellect. ...read more.