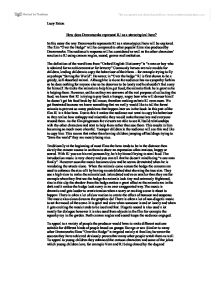 How does Dreamworks represent RJ as a stereotypical hero?

How does Dreamworks represent RJ as a stereotypical hero? In this essay the way Dreamworks represents RJ as a stereotypical hero will be explored. The film "Over the Hedge" will be compared to other popular films also produced by Dreamworks. The audience's response will be considered as well as the other characters' reaction to RJ using camera angles, sound, genres and institution. The definition of the word hero from "Oxford English Dictionary" is "a man or boy who is admired for an achievement or for bravery" Commonly heroes are role models for children, leading children to copy the behaviour of their hero - for example trying to fly or perhaps "Saving the World". However, in "Over the hedge" RJ is first shown to be a greedy, self-absorbed animal. Although he is alone the audience has no sympathy for him as he does nothing for anyone else so he deserves to be lonely and he shouldn't feel sorry for himself. He tricks the animals to help him get food; the animals think he is great as he is helping them. However, unlike us they are unaware of the real purpose of collecting the food, we know that RJ is trying to pay back a hungry, angry bear who will devour him if he doesn't get his food back by full moon, therefore making us hate RJ even more. ...read more.

Parents are able to relate to some characters especially Vern, they may feel a connection with him as they are both trying to look after a family. The humour makes it a fun experience and a diversion from stress at work or at home and spend time with their children - parents like nothing more than to see their children enjoying themselves. Disney and Dreamworks are two different film companies both of which are very successful and often release similar films to compete against each other for instance "Shark Tale" and "Finding Nemo". Dreamworks films always have a moral put across in a fun and exciting way. Their ethos tends to change depending on the age group but always teaching you subjects such as friendship, family, race and sometimes a hint of romance. Dreamworks' story lines are often more realistic than Disney even though the characters are still either fictional or cartoon. The concept is still extremely believable and often happens to people in real life, whilst Disney's ethos is more simple - just enjoy and be yourself, what you see is what you get. Both film companies seem to want the audience to relate to the characters and therefore want to do a sequel or perhaps just see it again. ...read more.

The first few events take place at night, this adds to the effect of RJ being sad, lonely and scared as he is running away from Vincent and has an impossible task to do. It is ironic how there is a straight cut from darkness to spring time because after having RJ all by himself at night we witness the family happy and excited to be together. To conclude RJ has developed dramatically from the beginning of the story. He's first a selfish, greedy racoon with no one but himself to think or care about! He has no conscience and using people does not affect him at all. However as the story grows we observe RJ changing for the better, he realises how much the forest animals care about one and other and wishes he could experience the same feeling. By the end of the film the audience has acknowledged that RJ's attitude has changed vividly. He obviously regrets the mistakes he has made in the past such as using them and stealing food and he comes back to save them like a real hero and is loyal to his new family. ?? ?? ?? ?? Lucy Eaton ...read more.