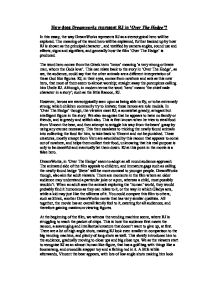 How does Dreamworks represent RJ in Over The Hedge?

How does Dreamworks represent RJ in 'Over The Hedge'? In this essay, the way DreamWorks represents RJ as a stereotypical hero will be explored. The meaning of the word hero will be explained, further backed up by how RJ is shown as the principal character , and testified by camera angles, sound use and effects, signs and signifiers, and generally how the film 'Over The Hedge' is produced. The word hero comes from the Greek term 'heros' meaning 'a very strong or brave man, whom the Gods love'. This can relate back to the story in 'Over The Hedge', as we, the audience, could say that the other animals are a different interpretation of these God like figures. RJ, in their eyes, comes from nowhere and acts as this new hero, that most of them seem to almost worship; straight away the porcupines calling him Uncle RJ. Although, in modern terms the word 'hero' means 'the chief male character in a story'; such as the little Racoon, RJ. However, heroes are stereotypically seen upon as being able to fly, or to be extremely strong; which children commonly try to imitate; these heroes are role models. ...read more.

This is because we as the audience can see how scary and enormous he is in comparison, you can see his huge sharp teeth and hear his low pitched growl. We realise how intimidating this must be to RJ. Personally, I believe that the night time scene at the beginning of the movie is a good indication of how Dreamworks produce hidden meanings in their films splendidly. The night represents the start of the film, as all the animals are hibernating except RJ. It could also epitomize RJ's fear from Vincent, the bear. However, this time scene cuts straight to the sunny, snow melting spring morning. This is ironic as we also see the moon in the shot, we know that RJ is quickly running out of time to get the food back to the ferocious bear. This cut to the spring scene could also mean a fresh start for RJ (to be a better all round person), but we do not find this out until later in the film when RJ puts his newly found friends before himself. As in most Dreamworks films, sound is a very important and effective part of the movie. ...read more.

On the other hand, Disney's concept is a lot simpler and aims mostly for children to enjoy the experience, but to also makes the common adult remember when they were young, and can enjoy it too. Overall though, a child would probably not have a preference in to what they would rather see, i.e. Dreamworks or Disney; but with the older person taken into consideration, they would probably want to see a film they can relate to which in this case could be 'Over The Hedge'. Finally, at the end of the film we can see how RJ has drastically changed from the beginning. As mentioned, he originally was a greedy, arrogant, sneaky and selfish animal. He doesn't seem to regret his actions, and appears to have no conscience. As the film progresses, we slowly but surely see how he changes for the better. RJ begins to realise genuinely how good it feels to be in a family, and wants to feel it permanently. This is why right at the end; we witness RJ risking his life to save the group of animals. RJ's conscience seems to come back, and he begins to regret what he has done. We also see that in the last scene or two, he really is the stereotypical hero that we are not used to seeing. ...read more.