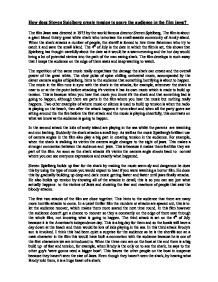 How does Steven Spielberg create tension to scare the audience in the film jaws?

How does Steven Spielberg create tension to scare the audience in the film jaws? The film Jaws was directed in 1975 by the world famous director Steven Spielberg. The film is about a giant blood thirsty great white shark who terrorises the small seaside community of Amity island. When the shark attacks a number of people, the sheriff is forced to hire three fishermen who try to catch it and save the small island. The 4th of July is the date in which the film is set, this shows that Spielberg has thought carefully about the date as it would be a warm evening and the hot day would bring a lot of potential victims into the path of the man eating shark. The film develops in such away that I keeps the audience on the edge of there seats and keep wanting to watch. The repetition of the same music really empathises the damage the shark can create and the overall power of the great white. The slow pulse of spine chilling orchestral music, accompanied by the clever camera angles of Spielberg, hints to the audience that something horrifying is about to happen. ...read more.

For example, when the shark is stalking its victim the camera angle changes to the sight of jaws. This makes a stronger connection between the audience and jaws. This is because it makes them feel like they are part of the film. As soon as the shark attacks it's victim the camera angle shoots back to normal where you can see everyone expressions and exactly what happened. Steven Spielberg builds up fear for the shark by making the music seem sly and dangerous he does this by using the type of music you would expect to hear if you were watching a horror film. He does this by gradually building up deep and dark music getting faster and faster until jaws finally attacks. He also builds up tension by showing all of the attacks in detail, this is so you can see just what actually happens to the victims of Jaws and showing the fear and reactions of people that saw the bloody attacks. The first two attacks of the film are close together. This hints to the audience that there are many more horrific attacks to come. ...read more.

This leaves the other people on the boat in suspense because they haven't seen the size of Jaws. Even though they haven't seen the shark, by hearing what Brody told them, it is a huge beast of a shark. Although I thought there was a number of scary parts to the film, the scariest part for me was at the end when Hooper gets attacked in the metal cage up until Brody kills the shark. This is because there is a lot of tension at this point and know on really knows what is going to happen and who is going to get killed, Brody or the shark? Again the music shows the tension by dramatically increasing the tempo. We also see the significance of the air canisters aboard the boat when Hooper shouted at Brody when he knocked them over "they could explode". Then Brody throws two of the larger air canisters into the sharks menacing jaws and starts shooting at it, as he does the shark explodes into tiny pieces. Hooper returns to the sea surface, the water laced with blood from Jaws. It is a relief to the audience that both Brody and hooper have survived this thrilling adventure. Archie Griggs. ...read more.

*** This essay has some good features. The candidate has identified a variety of ways that tension has been created, using camera, sound and dialogue. They could be more specific about use of camera. The essay lacks key media terms and these need to be included.