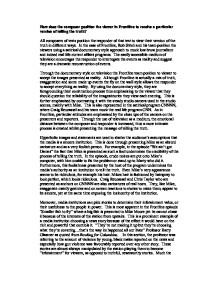 How does the composer position the viewer in Frontline to receive a particular version of telling the truth?

How does the composer position the viewer in Frontline to receive a particular version of telling the truth? All composers of texts position the responder of that text to view their version of the truth in different ways. In the case of Frontline, Rob Stitch and his team position the viewers using a satirical documentary style approach to mock low brow journalism and indeed real life current affairs programs. The easily accessible medium of television encourages the responder to interrogate the events as reality and suggest they are a dramatic reconstruction of events. Through the documentary style on television the Frontline team position to viewer to accept the images presented as reality. Although Frontline is actually a mix of truth, exaggeration and some made up events the fly on the wall style allows the responder to accept everything as reality. By using the documentary style, they are foregrounding their construction process thus emphasising to the viewer that they should question the reliability of the images/stories they view each evening. ...read more.

Moreover, media institutions can pick stories to determine their infotainment value, or their usefulness to the people in power. This is most apparent in the Frontline episode "Smaller fish to fry" where a big fish is presented to Mike Moore yet he cannot chase it because of the interests of the station from upstairs. This is a prominent example of a media institution choosing a news story because of the effect it would have on the rich and powerful that controls it. "They're not making it up but they're choosing what they're covering...that's the way its happened all our lives" Professor Barry Glassner as quoted from Bowling for Columbine. In this section, the professor was referring to the amount of violence by young, black males reported on the news and especially how gun violence was favourably reported over any other story. These stories are almost always manipulated by the station playing them to become "infotainment" for viewers, as opposed to truthful, newsworthy stories. ...read more.

Moore has positioned his viewers effectively to push his point the same way that the media have pushed their point over the years amongst society. However, the light hearted, almost mocking speech Heston did give following the Columbine incident is cut with an emotional speech given by victim's father. This puts the incident and the truth behind it into perspective using the technique of editing. The process of telling the truth is a construction in the hands of the composers who decide what aspect, if any; of the truth the viewer will receive. Through the use of techniques the composers are able to represent their construction and the values they place in esteem. In the case of Frontline, obviously the use of satire is the main way they criticise the media as an unscrupulous, insincere institution. Although, each text has its own way of presenting the truth and thus, Frontline, CNNNN and Bowling for Columbine merely represent one such way. ...read more.