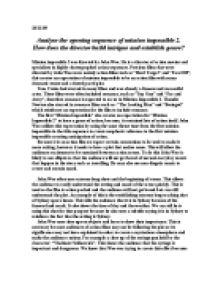 How does the director of Mission Impossible 2 build intrigue and establish genre in the opening sequence?

﻿28/11/09 Analyse the opening sequence of mission impossible 2. How does the director build intrigue and establish genre? Mission impossible 2 was directed by John Woo. He is a director of action movies and specialises in highly choreographed action sequences. Previous films that were directed by John Woo were mainly action films such as ?Hard Target? and ?Face/Off?, this creates an expectation of mission impossible to be an action film with many dramatic stunts and a fasted paced plot. Tom Cruise had starred in many films and was already a famous and successful actor. These films were often included romance, such as ?Top Gun? and ?Far and Away?, therefore romance is expected to occur in Mission Impossible 2. Thandie Newton also starred in romance films such as: ?The Leading Man? and ?Besieged? which reinforces an expectation for the film to include romance. The first ?Mission Impossible? also creates an expectation for ?Mission Impossible 2? to have a genre of action; because, it contained lots of action itself. John Woo utilises this expectation by using the same theme tune from the first mission impossible in the title sequence to create anaphoric reference to the first mission impossible creating anticipation of action. Because it is an action film we expect certain conventions to be used to make it more exiting; however it needs to have a plot that makes sense. This will allow the audiences excitement to be sustained between action scenes. To do this John Woo is likely to use ellipsis so that the audience will not get bored of normal everyday events that happen in the story such as travelling. He may also use non-diegetic music to create and sustain mood. John Woo often uses extreme long shots and the beginning of scenes. This allows the audience to easily understand the setting and mood of the scene quickly. This is used so the film is action packed and the audience will not get bored but can still understand the plot. ...read more.

These fast changing shots create tension because they are unexpected and slightly overwhelming. John Woo does this to allow the audience to empathise with ?Nyah?s? nervousness before she commits the crime. Overall the opening sequence to ?Mission Impossible 2? uses mainly long shots as these can include lots of objects with connotations to create Woo?s desired effect. For example in the scene set in Spain whilst the characters ?Nyah? and ?Ethan? leave the villa a high angle long shot showing the courtyard is used. Woo uses this to create colour imagery as the courtyard is bathed in blue light to create connotations of benevolence and bowls of fire and orange lights in the fountain to create connotations of action. However to show objects of significance Woo uses close ups so the audience isn?t distracted by other objects and the chosen one is obvious and emphasized. For example in the scene of the character ?Vladimir? walking out of the lab Woo uses a close up of the briefcase. This tells the audience that it contains an object of significance. In the background of the climbing scene Woo uses a non diegetic reggae song. This song tells the audience that the character ?Ethan Hunt? is climbing for fun and not on a mission because the song is cheerful and has a major tonality. It also is a song that didn?t originate from America. This tells the audience that he is on holiday because the film was aimed at Americans who normally would only leave their home country for a holiday so associate foreign music with holidays. Showing that the character is climbing for fun makes him seem reckless, as if he enjoys danger. This causes the audience to anticipate reckless stunts that happen later in the film. The drums in the background of the non diegetic music are similar to a heart beat and are used to symbolise the characters heartbeat. ...read more.

In the scene set in Spain dim lighting is used. This creates a dark atmosphere which is more relaxing and romantic than a bright one. The darkness also allows Woo to empathise important objects and people by putting them in light so they stand out against things in the dark. For example in the point-of-view shot of the character ?Nyah? she stands out because light is shining on her but not the crowd. Woo uses this because it is the start of a romance therefore a romantic mood must be used to show this to the audience. The lighting that is used is red and orange like flames; some even originates from flames. This is used to create an atmosphere of action and passion. The location, Spain, according to the director?s commentary was chosen because it reminded Woo of romance so is an ideal starting point for the characters? romance. The costumes of the flamenco dancers were chosen because it makes them stand out and because it is like flames therefore it contributes to the atmosphere. Overall the main effect of the sequence is that the audience is left anticipating the rest of the film. It introduces and builds the characters? personality and the atmosphere for the rest of the story. It also recreates the genre of the first ?Mission Impossible? putting the audience in the mood for action. The sequence is distinguishable because of its high action content and the way it incorporates famous action stereotypes created in previous ?Mission Impossible? episodes from the television series and the previous film. For example: ?This message will self destruct in five seconds? is a mime often used in action films and parodies originating from ?mission impossible?. It also incorporates other action film stereotypes such as the appearance of the character ?Vladimir Nekovich?: he is a scientist, he has wild grey hair and glasses. The director builds intrigue rapidly in this sequence using dramatic action such as the climbing scene as well as more subtle suggestions of intriguing events such as the use of flames in the flamenco scene. ...read more.