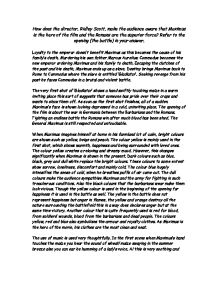 How does the director, Ridley Scott, make the audience aware that Maximus is the hero of the film and the Romans are the superior force? Refer to the opening (the battle) in your answer.

How does the director, Ridley Scott, make the audience aware that Maximus is the hero of the film and the Romans are the superior force? Refer to the opening (the battle) in your answer. Loyalty to the emperor doesn't benefit Maximus as this becomes the cause of his family's death. Murdering his own father Marcus Aurelius; Commodus becomes the new emperor ordering Maximus and his family to death. Escaping the clutches of the past and his death, Maximus ends up as a slave. Destiny brings Maximus back to Rome to Commodus where the slave is entitled 'Gladiator'. Seeking revenge from his past he faces Commodus in a brutal and violent battle. The very first shot of 'Gladiator' shows a hand swiftly touching maize in a warm inviting place this sort of suggests that someone has pride over their crops and wants to show them off. As soon as the first shot finishes, all of a sudden Maximus's face is shown looking depressed in a cold, uninviting place. The opening of the film is about the war in Germania between the Barbarians and the Romans. Fighting an endless battle the Romans win after much blood has been shed. The General Maximus is still respected and untouchable. ...read more.

At this point the camera zooms in and all of a sudden zooms back out but you can catch the disappointment in his looks and not being where he desires to be. Another shot that is quite important when considering the battlefield. This shot shows the surroundings of the battlefield; trees and blue midst. You also see Roman soldiers and their armour because this clearly shows the neat presentation of the Romans. The third important shot is when Maximus is planning to attack from behind and is telling his army about where they would be in three weeks time. This shot is thoughtful as it shows Maximus more largely and brightly then anything else so therefore it means he is the most important person there. The last and final important shot is when the battle has started the two sides Romans and Barbarians clash into each other. This is important because not only can you see the characteristics of each team but the methods they fight in which can show their skills. It is very clear to us that Maximus the main character throughout the opening the camera mostly shoots on Maximus. ...read more.

That's why Maximus does not speak either Spanish or Latin. We cannot understand what the Barbarians say but still there are no subtitles because the Barbarians are meant to look beastly and scruffy and not clever, but by their actions we can make out. The director of the movie, Ridley Scott, supports the Romans in the movie we can tell by the features of both armies and their behaviour. For example, when the Romans send their messenger the Barbarians send him back headless on the horse. This should not be done in any form of a battle. The messenger should not be killed so this also can be considered. Maximus is seen as a leader in not only the opening but throughout the movie; during the battle he leads the army and gives orders about he is an absolute leader. The whole movie is a great movie and links up very well with the opening; it is only because of the opening where we can notificate Maximus is as a leader. The ending is a good ending because the hero (Maximus) seeks his revenge by killing Commodus, the murderer of his family and Maximus meets his family. In the end, we see Maximus dead but with red rose petals around him and dreaming of his family all this shows positive and pleasant things about Maximus. ...read more.