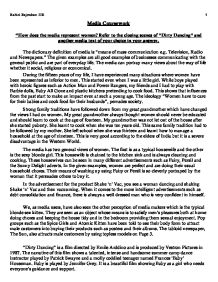 &quot;How does the media represent women? Refer to the closing scenes of &quot;Dirty Dancing&quot; and another media text of your choice in your answer.

Media Coursework "How does the media represent women? Refer to the closing scenes of "Dirty Dancing" and another media text of your choice in your answer. The dictionary definition of media is "means of mass communication e.g. Television, Radio and Newspapers." The given examples are all good examples of businesses communicating with the general public and are part of everyday life. The media can portray many views about the way of life whether it social, religious or economical. During the fifteen years of my life, I have experienced many situations where women have been represented as inferior to men. This started even when I was a little girl. While boys played with heroic figures such as Action Man and Power Rangers, my friends and I had to play with Barbie dolls, Baby All Gone and plastic kitchens pretending to cook food. This shows that influences from the past start to make an impact even at such a young age. The ideology "Women have to care for their babies and cook food for their husbands", pervades society. Strong family traditions have followed down from my great grandmother which have changed the views I had on women. My great grandmother always thought women should never be educated and should learn to cook at the age of fourteen. My grandmother was not let out of the house after she started puberty. She learnt to cook when she was ten years old. This same family tradition had to be followed by my mother. ...read more.

This has been done because there is no tension therefore quick, sharp editing is not needed. The slow editing represents his break free from his controlled past life. Colour is very important in all films but its importance is very significant in the closing scene of "Dirty Dancing". Before Johnny and Baby appear on the stage, coloured lighting is not used so much. The hall is a natural colour but when they start their dance the stage is lit by a red light which signifies sexuality and passion. When he holds her very intimately, the light becomes even redder which represents the deep, strong passion and love they have for each other. Baby is wearing a white dress whereas he is wearing black clothes. This shows they are in contrast to each other but are like Ying and Yang therefore meaning they are ideal for each other. Baby's father wears a grey suit which is very neat indicating that he is very conservative and strict. He is a type of man who does not allow his daughter to date someone and restricts his daughter's freedom totally. Representation is one of the media concepts which has to be thought about very carefully as it is the one which puts across many ideas to viewers. The representation of this film is independence and this can be seen in many of Baby's actions. The most significant action is her position of a bird. This shows that she is flying high and far away from her problems and her previous life. ...read more.

The advert would also appeal to female car buyers as it suggests how they should treat their car and how they should value it. The advertisement reverses the whole concept of women being inferior to men and that men can do anything without having the need to tell their women. The story can be interpreted as a story to men the revenge women can take if they have an affair or do something without their women knowing. Both of these media texts have portrayed women in two different ways. In the film "Dirty Dancing" Baby is seen as a girl who has to listen to men and do what they say. She is represented as a very weak girl both physically and emotionally. Her feelings for her dance instructor override her control and leave her in a situation where she has to decide between parents and love. Time has changed and women have learnt to stand up for themselves. If Margaret Thatcher did not go to school but stayed at home and had children, she would have not become the world's first woman prime minister. The Pankhurst sisters were able to prove that women have the same strength as men and that we can do anything they can do. Women will always be seen as sexual objects as in the Nissan Micra adverts but the media should try to avoid portraying them as inferior to men because without even us realising the media forms our views on society. Men and women all have equal rights and men should remember that without women, men would not even exist! 3 1 Rahini Rajendran 11B ...read more.