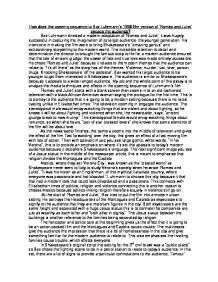 How does the opening sequence to Baz Luhrmann's 1996-film version of 'Romeo and Juliet' engage the audience?

How does the opening sequence to Baz Luhrmann's 1996-film version of 'Romeo and Juliet' engage the audience? Baz Luhrmann directed a modern adaptation of 'Romeo and Juliet'; it was hugely successful in capturing the imagination of its target audience- the younger generation. His intentions in making the film were to bring Shakespeare's "amazing genius" and extraordinary storytelling to the modern world. The incredible attention to detail and determination the director to brought the famous story to life for a modern audience ensured that the tale of ancient grudge, the power of fate and true love was made entirely accessible. He chose 'Romeo and Juliet' because it relates to the modern themes that the audience can relate to. "It's all there" as the story has all the themes- Violence, murder, lust, love, poison, drugs. Knocking Shakespeare 'off his pedestal', Baz wanted his target audience to be younger to get them interested in Shakespeare. The audience is similar to Shakespeare's because it appeals to a wide-ranged audience. My job and the whole point of this essay is to analyze the media techniques and effects in the opening sequence of Luhrmann's film 'Romeo and Juliet' starts with a blank screen then zooms in to an old-fashioned television with a black African-American woman saying the prologue for the first time. ...read more.

In this set, there are a lot of signs to provide a particular connotations to the audience; 'l'amour' image of a 'Coca Cola' logo relate to the modern feel of things and the theme of 'Love Versus Hate' (l'amour is the french word for love). 'Add more to fuel to your fire' sign signifies to the audience that sometimes dangerous is about to happen. As the petrol station goes up in flames so does the memory of the 2nd civil brawl, Luhrmann might have meant to show that even though they are in the lime light they will still fight and their feud is having a negative effect on Verona. Kim Barrett, the fashion designer for 'Romeo and Juliet' chose the costumes carefully so that it would relate to the modern references to the characters and distinguish between the rivalling families. She describes the Montagues as 'utilitarian', normal and everyday like this is to give the audience the impression they are down- to- earth. They wear sunglasses and un-buttoned, Hawaiian shirts to signify they live in a hit environment and hang around the beaches. The Montagues also have tattoos on the back of the head, dyed hair, and chain necklaces to imply that they are laid back and extravagant. ...read more.

This long shot, shows two people that make the characters seem smaller than if it was a medium or a close up. The director chose this shot to show us that they are holding there hands up and emphasises that they're looking up. The effect of the scenery and background is that it's quite modern due to modern public transport. But it is still quite run down due to litter and old-fashioned cars. This emphasises that the Montagues and Caplets cause trouble in the city and the city is getting quite neglected because of their fighting. The significant colour in this shot is red to connate blood and anger in the brawl. The most dominant colour is white in the sky and on the bus this might signify that the Chief is bringing peace to the city. To conclude, How does the opening sequence to Baz Luhrmann's 1996-film version of 'Romeo and Juliet' engage the audience? It uses modern themes, techniques and connotations to appeal to today's modern audience. It uses intertextuality to intertwine different elements, techniques and themes. It uses different camera movement, shot angles to differentiate different aspects of the film. It uses setting to make it easier and prettier on the eye. So to conclude the conclusion, Luhrmann engages with the mood of violence and the hints of love. 'Romeo and Juliet' is excellently made and pure entertainment. By Heather Amos ...read more.