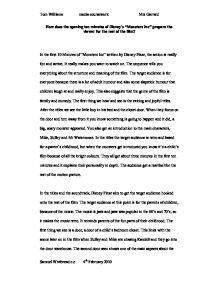 How does the opening ten minutes of Disneys Monsters Inc prepare the viewer for the rest of the film?

How does the opening ten minutes of Disney's "Monsters Inc" prepare the viewer for the rest of the film? In the first 10 Minutes of "Monsters Inc" written by Disney Pixar, the action is really fun and active. It really makes you want to watch on. The sequence tells you everything about the structure and meaning of the film. The target audience is for everyone because there is a lot of adult humour and also some slapstick humour that children laugh at and really enjoy. This also suggests that the genre of the film is family and comedy. The first thing we hear and see is the exiting and joyful titles. After the titles we see the little boy in his bed and the closet door. When they focus on the door and turn away from it you know something is going to happen and it did, a big, scary monster appeared. You also get an introduction to the main characters, Mike, Sulley and Mr Waternoose. In the titles the target audience is retro and based for a parent's childhood, but when the monsters get introduced you know it's a child's film because of all the bright colours. They all get about three minutes in the first ten minutes and it explains their personality in depth. ...read more.

The child screamed but then so did Mr Bile (the monster). At first Mr Bile screamed but then he got so scared he kicked a football but it hit the child's wall and came straight back at him. Then he jumped up in the air and landed on some playing jacks. This is a great example of slapstick comedy; Slapstick is used quite a lot further on in the film. It also undermines a real monster. It links with illusion and deception. When the siren sounds ending the simulation it ruins the illusion. Most scary monsters are ugly and dark coloured but Mr. Bile was brightly coloured and had a really clumsy look to him. The lady monster that was examining Mr Bile looked annoyed because the other four monsters she was examining were so grumpy and miserable. The three main characters, Sulley, Mikey and Mr Waternoose all get in depth introductions to them. Sulley and Mikey come across as the hero's. Sulley gets first mentioned by Mr. Waternoose at the end of the teaser. He says that Sulley is the best monster out of them all. When Sulley and Mikey are finally introduced they are in their own house. It's an illusion when Mikey is making himself to be the voice over on the radio. ...read more.

Also on the walk to work the newspaper article says 'rolling blackouts expected,' this shows that we are going to have natural disasters if we don't buck our idea's up and do something about global warming. Also on the way to work, the monster that works in the grocery shop gave Mikey and Sulley a piece of fruit each. This encourages children to eat healthy food and always eat their 5 fruit and vegetable a day because children will believe if they do eat healthily they will become a hero just like Sulley. In the first 10 minutes of Disney's "Monsters Inc," I think the viewer is prepared really well for the rest of the film. The whole family are the target audience. The titles and sound track are really catchy and it made me want to watch on. I also think the teaser is made perfectly for the target audience because there is a lot of humour for the whole family. In the first ten minutes there are a lot of jokes that only the parents would understand but also some jokes that children understand. Personally I think Disney Pixar have focused really well on the target audience. Everything in the first 10 minutes links with at least one thing that happens in the rest of the film. ?? ?? ?? ?? Tom Williams media coursework Mrs Garrard Samuel Whitbread c.c 4th February 2010 ...read more.