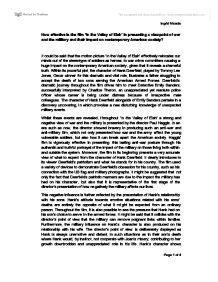 How effective is the film In the Valley of Elah in presenting a viewpoint of war and the military and their impact on contemporary American society?

How effective is the film 'In the Valley of Elah' in presenting a viewpoint of war and the military and their impact on contemporary American society? It could be said that the motion picture 'In the Valley of Elah' effectively relocates our minds out of the stereotype of soldiers as heroes, to war crime committers causing a huge impact on the contemporary American society, given that it reveals a shameful truth. Within its powerful plot, the character of Hank Deerfield, played by Tommy Lee Jones, Oscar winner for this dramatic and vital role, illustrates a father struggling to accept the death of two sons serving the American Armed Forces. Deerfield's dramatic journey throughout the film drives him to meet Detective Emily Sanders, successfully interpreted by Charlize Theron, an unappreciated yet resolute police officer whose career is being under distress because of irrespective male colleagues. The character of Hank Deerfield alongside of Emily Sanders partake in a discovery uncovering, in which provokes a new disturbing knowledge of unexpected military events. Whilst these events are revealed, throughout 'In the Valley of Elah' a strong and negative view of war and the military is presented by the director Paul Haggis. ...read more.

This gives the viewer a hint of why Hank behaves in certain ways, and also reminds us of his nationalism, as when he is in the barracks and happens to face a random soldier's room that keeps an Iraqi flag, making Hank extremely uncomfortable. Yet in the barracks, Hank discovers his son's kit bag, which used to belong to him. At this instance, there is a camera close up on Hank's face, which surprisingly reveals a tender and sad emotion; the viewer realises that Hank actually cares and misses his son. Furthermore, Hank steals Mike's phone, reflecting the presence of his previous military career. He also acquires his son's Bible, illustrating the presence of biblical themes on the film. The viewer is conducted to empathise, now, with the character of Hank as he seems be abandoned. The decision to make Hank's appearance appealing to the viewer is chosen by the director so that we feel compassionate for him, and start taking his side; resulting effectively in the audience recreating a new idea of how military affects us, in the same way it will further in Hank. ...read more.

This cause a huge impact on the viewer, as the director proves effectiveness showing his point of view on the military with the lack of emotions seems to represent the effect the war and the military applies on the soldiers' life. Another important point of impact for the viewer, is when it is discovered that the state actually was aware of the true murderers of Mike, and that the state preferred to give a private sentence, so that there was no court involving the case in order that it was not publicised and the stereotype of the army and its members continued intact. Nevertheless, it made Hank realise that he had been idolising a fraud. As a motif and a symbol for that, the director presented his point of view over a scene where Hank, took the US flag that used to belong to Mike in Iraq and ran it upside down, reflecting his disgust for the turmoil condition the US has become. In conclusion, I believe Haggis has effectively showed his point of view on the war and the military and its impact on the contemporary US society. Throughout the film, he led its viewer so that they were charismatically guided to support his point of view. ?? ?? ?? ?? Ingrid Nicacio Page 1 of 4 ...read more.