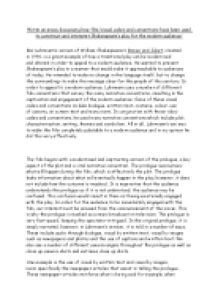 How have film/visual codes and conventions in Baz Luhrmanns adaptation of Romeo and Juliet been used to construct and interpret Shakespeares play for the modern audience?

﻿?Write an essay discussing how film/visual codes and conventions have been used to construct and interpret Shakespeare?s play for the modern audience? Baz Luhrmann?s version of William Shakespeare?s Romeo and Juliet, created in 1996, is a great example of how a traditional play can be modernized and altered in order to appeal to a modern audience. He wanted to present Shakespeare?s play in a manner that would make it approachable to audiences of today. He intended to make no change in the language itself, but to change the surroundings to make the message clear for the people of this century. In order to appeal to a modern audience, Luhrmann uses a number of different film conventions that convey the many narrative conventions, resulting in the captivation and engagement of the modern audience. Some of these visual codes and conventions include dialogue, written text, costume, colour, use of camera, on screen text and many more. In conjunction with these video codes and conventions, he used many narrative conventions which include plot, characterisation, setting, themes and symbolism. All in all, Luhrmann?s aim was to make the film completely palatable to a modern audience and in my opinion he did this very effectively. The film begins with a modernised and captivating version of the prologue, a key aspect of the plot and a vital narrative convention. The prologue summarises what will happen during the film, which is effectively the plot. ...read more.

Another dramatic technique which further contributes to characterisation is the use of props. For example, the actors, instead of carrying swords with them, hide guns in their shirts and wield them expertly. Luhrmann?s constant alterations of the props, entices the audience into genuinely feeling the spirit of Shakespeare. These props help with characterisation as they are labelled with either ?Montague? or ?Capulet?. Not only are they labelled with their ?faction? but with the name of the sword from the original script, for example the guns of the rival factions are labelled ?Rapier?, ?Dagger? and ?long sword?. This way, when a character asked for his weapon, he is not being anachronistic. Instead of being set in Verona, Italy with events take place in a crowded seaside metropolis area called Verona Beach. Verona Beach is a modern-day city, with cars, high-rise buildings, gas stations, and hot dogs stands, none of which were even conceived during the time that Romeo and Juliet was written or performed. The reason for this is that the modern audience can relate this modern setting. If Luhrmann had used a setting similar to Shakespeare?s intended one, the audience would be very confused and may lose track of what is happening. There are a variety of camera shots of the different settings within Act 1, Scene 1. For example, there are long shots of the whole city with the two main buildings belonging to each of the families. ...read more.

We also see the theme of fate continuously reinforced as we see many religious symbols throughout this scene and in the rest of the movie. We see religious images such as crosses, the statue of Christ, churches and the Virgin Mary. All of these objects contribute to the theme of fate and destiny. They are so important in contributing to this theme as it shows that people believe that God control your destiny. The large statue of Christ is situated between the two large buildings belonging to the Montagues and Capulets. This gives the audience the impression that God is the only thing that is preventing them from fighting and effectively killing each other. In Conclusion, the prologue and Act 1, Scene 1 start off the film in a very interesting and different way, that is sure to capture the audience?s attention. Baz Luhrmann had the hard task of adapting William Shakespeare?s Romeo and Juliet and transforming it to suit a modern audience. By using a number of different narrative conventions from the original script and adding visual codes and conventions, Luhrmann was able to do this. Some of the narrative conventions include plot, characterisation, setting, themes and issues and symbolism. Adding to these were the film conventions that include dialogue, written text, costume, colour, use of camera, on screen text and many more. This film as a whole transforms Shakespeare?s writing into a contemporary setting and location, with modern concepts while still keeping the language of Shakespeare alive, making it easier to understand for a modern viewer and more relevant to a modern audience. By Christian Long ...read more.