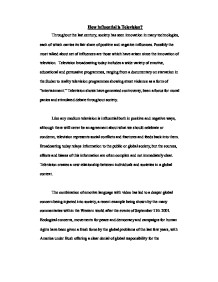 How influential is Television?

How influential is Television? Throughout the last century, society has seen innovation in many technologies, each of which carries its fair share of positive and negative influences. Possibly the most talked about set of influences are those which have arisen since the innovation of television. Television broadcasting today includes a wide variety of emotive, educational and persuasive programmes, ranging from a documentary on starvation in the Sudan to reality television programmes showing street violence as a form of "entertainment." Television shows have generated controversy, been a focus for moral panics and stimulated debate throughout society. Like any medium television is influential both in positive and negative ways, although there will never be an agreement about what we should celebrate or condemn, television represents social conflicts and fractures and feeds back into them. ...read more.

The next positive point controversially is the widening of social attitudes over the last decade through a hidden doctrine of positive discrimination we have seen a more socially diverse community of actors and actresses. In an attempt to avoid any allegations of discrimination this doctrine has allowed society to become aware of a wider society that encloses it, upon recognising the interest of its viewers the producers have gone one stage further, to include regular programmes focused on smaller cultures, leading noticeably to society's acceptance and awareness of different cultures. One example surrounds the formally controversial concept of homosexuality; in my opinion a main contribution to the greater acceptance to homosexuality is the awareness that has been made through television. ...read more.

This influence is inescapable as every one today uses the media for information and entertainment. The range of media available increases all the time, as more and more people have more and more technologies which access media products; your phone links to the web, which carries videos, tunes and online newspapers; we talk all the time about the media we share. Media influences extend from personal life to the outcome of elections; elections are lost and won on television, footballers' careers are made and broken, royalty rises and falls depending on a public image, constantly created and re-created in the media more fundamentally, our values and beliefs are subtly shaped by the ideology frameworks which underpin media reporting, TV drama and Hollywood film (to name but three. ...read more.