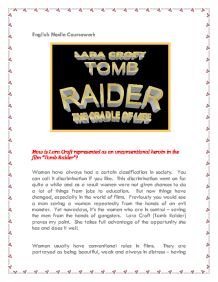 English Media Coursework How is Lara Croft represented as an unconventional heroin in the film "Tomb Raider"? Women have always had a certain classification in society. You can call it discrimination if you like. This discrimination went on for quite a while and as a result women were not given chances to do a lot of things from jobs to education. But now things have changed, especially in the world of films. Previously you would see a man saving a woman repeatedly from the hands of an evil monster. Yet nowadays, it's the women who are in control - saving the men from the hands of gangsters. Lara Croft (Tomb Raider) proves my point. She takes full advantage of the opportunity she has and does it well. Women usually have conventional roles in films. They are portrayed as being beautiful, weak and always in distress - having to be saved by a 'knight in shining armour' (Melanie Lewis, Women in the world of films). When we first see Lara, she's wearing a black bikini, which is very sexy and revealing. In the past women were meant to be virginal and wearing white which meant that she was a good girl and men would respect her. But on the other hand, if she was wearing black she would have been seen as being evil and perverse. ...read more.

The objective of this film is to show that women are strong, not only physically but also mentally. The makers of the film want to show us that women can be sensuous, intellectual and independent at the same time. They also want to show us that you don't have to be a man to do certain tasks like using machinery and building things but in this case it's being a hero. Lara usually wears her hair up which gives her a tough and hard image, but I addition to this, she leaves the end out which gives her that touch of feminism. In a way, Lara leaving her hair in a ponytail gives the impression of a typical flirtatious woman who is always shaking her hair about and teasing the opposite sex. Lara also shows us another hairstyle when she goes to visit her x - boyfriend 'Terry' who is currently in jail. She wears her hair in a side ponytail and plaits it at the end. This gives her a very sexy and feminine look and the factor that helps this image is the fact that she has very long and dark hair. This gives her a lovely mysterious aspect. Lara does not dress masculine or feminine, but she dresses to fit the occasion. Take for example, when she goes to visit Terry, she wears something purely woman like. ...read more.

Yet these days it is not very difficult to find a woman who stands up for the rights of things. Personally, I regard this film as being a great example of role reversal because it shows us that woman can be as 'supposedly strong' as men. There haven't been many films or television programmes made that portray women as being heroines. The only television programme that I know has a heroine in it, is 'She hulk' the woman version to the hulk whose appearance is big and strong with muscles. It is a real big shame because nowadays, it is like women have to look masculine to be respected in their profession. This is also another reason why I admire this film. Lara does not look masculine at all. In fact, I did not see any muscles on her at all. Yet as virtuous as this film is, I do not believe that the message has got across the people of today. This sexism still goes on in our society today, even in our classrooms where you would have a teacher say something like "I need a couple of 'strong boys' to come and help me do something". Honestly I do not see why women can't be strong and feminine at the same time. Lara Croft (Tomb Raider) 'The cradle of life' has supplied me with a different outlook on women in the world of action films. I would recommend it to anybody. Atinuke Odunsi 10L ...read more.