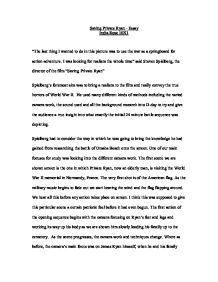 How Steven Spielberg was able to convery the true horror of WWII in &quot;Saving Private Ryan&quot;

Saving Private Ryan - Essay India Rose 10X1 "The last thing I wanted to do in this picture was to use the war as a springboard for action-adventure. I was looking for realism the whole time" said Steven Spielberg, the director of the film "Saving Private Ryan" Spielberg's foremost aim was to bring a realism to the film and really convey the true horrors of World War II. He used many different kinds of methods including the varied camera work, the sound used and all the background research into D-day to try and give the audience a true insight into what exactly the initial 24 minute battle sequence was depicting. Spielberg had to consider the way in which he was going to bring the knowledge he had gained from researching the battle of Omaha Beach onto the screen. One of our main focuses for study was looking into the different camera work. The first scene we are shown screen is the one in which Private Ryan, now an elderly man, is visiting the World War II memorial in Normandy, France. The very first shot is of the American flag. As the military music begins to fade out we start hearing the wind and the flag flapping around. We hear all this before any action takes place on screen. I think this was supposed to give this particular scene a certain patriotic feel before it had even begun. The first action of the opening sequence begins with the camera focusing on Ryan's feet and legs and working its way up his body as we are shown him slowly leading his family up to the cemetery. As the scene progresses, the camera work and techniques change. Where as before, the camera's main focus was on James Ryan himself, when he and his family arrive at the graveyard, an extreme long shot is used to scan the view though the eyes of the on-lookers and many different angles are shown of the graves. ...read more.

It reduces them to almost nothing and for a man to be crying and screaming like that you are made to feel great empathy for him. We see men with bloody stumps carrying lost limbs and this sequence includes many moments when I found it difficult to watch. We notice that there is no music playing at this precise point and there no music played whatsoever until the very end of the entire battle sequence. I believe this was to make the war seem as real as it possibly could, music would make it seem far too film-like and again, it may detract from what our attention should be focused on. It would make the scene even more dramatic but would take away the sense of realism that we know Spielberg wanted to expose the audience to. There is also hardly any distinctive dialogue. We hear desperate cries from the suffering men and the orders being shouted from those left in command, trying to regain control. Throughout this whole period, you hear the extreme gunfire and sounds of ammunition. The extreme attention to detail was unreal and this gritty reality of the detail helped the film convey the distress of the soldiers in combat. Not solely because of the bloody battle and the gore you are shown but because of the overall sadness of remembering that what you are watching is not made up, what is being shown in this film really did happen in June 1944. All the events are real, the gunfire is real and the emotions the actors have been told to illustrate are real. Although, I believe this was the point, this is exactly how Spielberg wanted people to feel as they watched. In the next succession of camera shots, the camera is focused on one of the main characters, Captain Miller. In this part of the opening sequence, he stumbles out of the blood ridden sea and falls to the ground. ...read more.

This was a technique cleverly put in by Spielberg to continue what he has been doing from the very start of the film and that is to keep us guessing. We are rarely told anything straight away. The final shot, that fades slowly out to the music, is the shot in which, Private Ryan is left, lying dead on the beach. My personal view on Steven Spielberg's initial aim to convey the realism and true horrors of war is that he did a truly incredible job. The extreme attention to detail that went into the making of this film and the overall sheer hard work is quite staggering. Spielberg received an amazing amount of credit when the film was released in 1998 and won five Oscars for best director, cinematography, film editing, sound effects editing, sound and eleven nominations for best picture, lead actor (Tom Hanks), original screenplay, score, art/set direction, makeup. It was voted the "best battle scene of all time" by Empire magazine and was ranked number one on TV guide's list of the "50 Greatest Movie Moments." 'Saving Private Ryan' was not only the highest top-grossing motion picture of 1998 but has been said to be "an unforgettable film achievement that has had a profound and lasting impact throughout the world." The D-DAY invasion in the first scene is the most realistic recreation ever filmed and has been praised by veterans all over the world. Historian, Steven Ambrose stated, "I have never seen anything remotely close to this for realism." As we found out very early on in our study, Spielberg did just about anything to make this film as believable as it could possibly be. This involved using, the entire Irish army reserve, 1500 extras, 40 barrels of fake blood and real amputees. This proves his sheer dedication to this film. He said that he, "tried to approximate what combat is really like" and it goes to show that his hard work all paid off and he succeeded in making one of the greatest and most shockingly realistic war films of our time. ?? ?? ?? ?? ...read more.