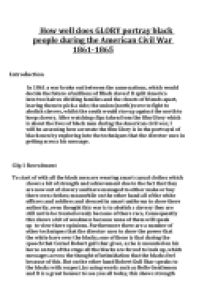 How well does the film &quot;GLORY&quot; portray black people during the American Civil War 1861-1865

﻿How well does GLORY portray black people during the American Civil War 1861-1865 Introduction In 1861 a war broke out between the same nations, which would decide the future of millions of Black slaves! It split America into two halves dividing families and the closets of friends apart, leaving them to pick a side; the union (north) were to fight to abolish slavery, whilst the south would rise up against the north to keep slavery. After watching clips taken from the film Glory which is about the lives of black men during the American civil war, I will be assessing how accurate the film Glory is in the portrayal of black men by exploring into the techniques that the director uses in getting across his message. Clip 1 Recruitment To start of with all the black men are wearing smart casual clothes which shows a bit of strength and achievement due to the fact that they are now out of slavery and have managed to either make or buy there own clothes; meanwhile on the other hand all of the white officers and soldiers and dressed in smart uniforms to show there authority, even thought this war is to abolish s slavery they are still not to be treated evenly because of there race, Consequently this shows a bit of weakness because none of them will speak up to view there opinions. Furthermore there are a number of other techniques that the director uses to show the power that the white have over the blacks; one of these is that during the speech that Cornel Robert gull shar gives, as he is mounted on his horse on top of the stage all the blacks are forced to look up, which messages across the thought of intimidation that the blacks feel because of this. ...read more.

Meanwhile the use of a tear is to make the cornel feel guilty for his actions as all the Black man was trying to do was running to this person to find some shoes to wear. Also the use of eye to eye contact between both the Black male and the Cornel magnifies the thought of guilt that the Cornell is feeling. To add to this the silence heard throughout the Black regiments during the punishment amplifies the distinctive sound whipping which also makes the viewers feel symphony and maybe even guilt towards the Black male. Further into the clip as the Cornel is trying to Talk towards one of the Black men about the punishment, he doesn?t reply which shows a bit of strength as he doesn?t wont to talk to him to due the orders that he gave; finally the Black man talks to him but the things the man says add more guilt onto Robert Gull Shar. In my opinion this adds Low Strength and Achievement, as the Cornell didn?t stand for what he believes in but his action were just to shows power over everyone else. All together in this clip doesn?t portray Black men in many ways but more about the Cornell and how he showed a low amount of strength and achievement. Clip 6 Pay Once again the technique of making the Cornell up higher forcing the Black men to look up gives out the thought of intimidation, also the Cornell gives out the news that they will now be earning a lower wage due to the skin colour, many of the men are not fussed by this but just glad to now be earning money, but anyway this shows a high amount of achievement ...read more.

So in that short section I have hopefully shown how a number of different techniques can really effect how the scene or clip is portrayed towards the viewers! Conclusion To conclude this piece of writing I am going to express my opinion on how does the film glory portray black people during the American civil war, taking into consideration any bias and referring to points from my essay. So to start of with I think that the film glory is very balanced due to in different scenes black people but also white a seen in a different light, for example in clips 1, 3 ,6 and 8 overall black people are portrayed in a positive way , meanwhile on the other hand in clips 2, 7 and maybe 4 and 5 overall black people and seen in a more negative than positive way. But just because I said that different clips overall portray black people in either a positive or negative manor doesn?t mean that the whole clip was positive or negative .As most clips had parts that contradict other like in clip 4 Rifle training one of the black men was doing really well at shooting down the targets which is a positive portrayal, but then whilst under pressure by the commander to reload the black man was to slow eventually dropping his gun to the ground, which in my opinion is a negative portrayal, so in each clip it has both positive and negative ways of portrayal, but sometimes a clip contains more than the other. So to answer the question ? Can we trust glory as an accurate portrayal of black people during the American civil war? taking points from both sides of the argument I would say, YES it is an accurate portrayal of black people during the American civil war. ...read more.