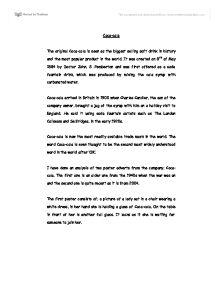 I have done an analysis of two poster adverts from the company; Coca-cola. The first one is an older one from the 1940s when the war was on and the second one is quite recent as it is from 2004.

Coca-cola The original Coca-cola is seen as the biggest selling soft drink in history and the most popular product in the world. It was created on 8th of May 1884 by Doctor John. S .Pemberton and was first offered as a soda fountain drink, which was produced by mixing the cola syrup with carbonated water. Coca-cola arrived in Britain in 1900 when Charles Candler, the son of the company owner, brought a jug of the syrup with him on a holiday visit to England. He sold it using soda fountain outlets such as The London Coliseum and Selfridges, in the early 1920s. Coca-cola is now the most readily available trade mark in the world. ...read more.

The language is indirect due to the fact that it only has the logo on it and no other text. The main colours on the poster are red for love and white for purity. The white Coca-cola logo is in the top left hand corner and it is of a medium size. The poster was released in the 1940's when the Second World War was going on. Even though the poster will have been seen by the general public TV advertising would not have been possible because the BBC was not broadcasting during the war. In those days only upper class and rich people would have TVs although there were some in restaurants and hotels. ...read more.

Neither of them uses any other text except for the company logo because everyone knows what Coca-cola is. 94% of the world's population have heard of the name, logo or company and colours. In conclusion I think that the two adverts differ greatly due to the fact that the older one is a photograph and the graphics aren't as good as the newer one. The newer one is definitely the most eye-catching one because the colour scheme is much brighter and also it is for a wider age range so smaller children and older people can also interested in it, whereas the other one only people aged 16-30 years would be affected to the adverts true meaning. ...read more.