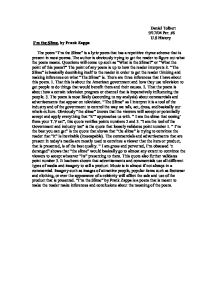 I'm the Slime, by Frank Zappa.

Daniel Tolbert 9/17/04 Per. #6 U.S History I'm the Slime, by Frank Zappa The poem "I'm the Slime" is a lyric poem that has a repetitive rhyme scheme that is present in most poems. The author is obviously trying to get the reader to figure out what the poem means. Questions will come up such as "What is the Slime?" or "What the point of this poem?" The point of any poem is up to how the reader interprets it. "The Slime" is basically describing itself to the reader in order to get the reader thinking and making inferences on what "The Slime" is. ...read more.

3. The poem is most likely (according to my analysis) about commercials and advertisements that appear on television. "The Slime" as I interpret it is a tool of the industry and of the government to control the way we talk, act, dress, and basically our whole culture. Obviously "the slime" knows that the viewers will accept or potentially accept and apply everything that "it'" approaches us with. " I am the slime that oozing' from your T.V set", this quote verifies points numbers 2 and 3. "I am the tool of the Government and industry too" is the quote that loosely validates point number 1. ...read more.

This quote also further validates point number 3. It has been shown that advertisements and commercials use all different types of media and imagery to sell a product. Music is in almost if not always in a commercial. Imagery such as images of attractive people, popular items such as footwear and clothing, or ever the appearance of a celebrity will affect the sale and use of the product that is presented. "I'm the Slime" by Frank Zappa is a poem that is meant to make the reader make inferences and conclusions about the meaning of the poem. ...read more.