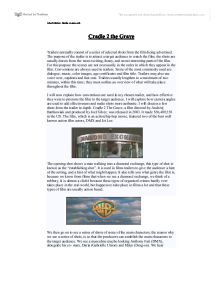 I will now explain how conventions are used in my chosen trailer, and how effective they were to promote the film to the target audience. Cradle 2 The Grave, a film directed by Andrzej Bartkowiak and produced by Joel Silver, was released in 2003.

Cradle 2 the Grave Trailers normally consist of a series of selected shots from the film being advertised. The purpose of the trailer is to attract a target audience to watch the film; the shots are usually drawn from the most exciting, funny, and most interesting parts of the film. For this purpose the scenes are not necessarily in the order in which they appear in the film. Conventions are always used in trailers. Some of the most commonly used are dialogue, music, color images, age certificates and film title. Trailers may also use voice over, captions and fast cuts. Trailers usually lengthen to a maximum of two minutes, within this time; they must outline an overview of what will take place throughout the film. I will now explain how conventions are used in my chosen trailer, and how effective they were to promote the film to the target audience. I will explore how camera angles are used to add effectiveness and make shots more authentic. I will discuss a few shots from the trailer in depth. Cradle 2 The Grave, a film directed by Andrzej Bartkowiak and produced by Joel Silver, was released in 2003. It made $56,489,558 in the US. The film, which is an action/hip hop movie, featured two of the best well known action film actors, DMX and Jet Lee. ...read more.

We then see someone drop some black diamonds on a table. We hear the shimmering sound as it hits the surface. The audiences now know exactly what the gangs were after. We follow on to see a close shot of Anthony fait, once again the purpose of using this type of shot was to show the expression on his face, as he saw the diamonds. We hear Miles make a "woooohooo", sound in amazement, followed by Anthony Fait saying "Jackpot". These words in the dialogue were used in the trailer, because they were the main words, and the purpose of including them in the trailer was to inform the audience once again that the gang had found what they wanted. Further on, we see a man jump down from high ground, he lands in a crouch with Anthony Fait under his knees. As he jumps, once again the use of the solarize styled lighting is used. Also as the guy jumps down, the music is fast paced, this helps emphasize the idea of the action-based film. This also helps get the attention of the target audience. In the next shot, we see four guys, all dressed in black, we see them knocking down a door, we can understand the fact that they are angry, and by the looks of it, there will be a fight. ...read more.

It also contains fast paced music which helps emphasize the genre of the film very well, and as I had said before, it helps create a rhythm. The reason why the trailer producers used fast cuts was so that they can show glimpses of the best action bits, and not show it all. This will make the target audience want to see more, but in order to do that; they will have to watch the film, which is the primary objective of a trailer. What I realised was, in no parts of the film did it show the age certificate, this is a bad point because it will make the audience confused. Another bad point would be to keep the trailer short; the trailer is kind of dragging, and shows the same type of thing over and over again, this may bore the audience. The trailer lengthens to 2:12 seconds, where a normal trailer is less than two minutes, In order to shorten the trailer, producers should have thought about the structure, and an increase in use of fast cuts at the beginning of the trailer. However, I think the trailer was successful, as it used many conventions to attract its target audience. The film was very successful in the market as it made lots of money; this comes to show that the trailer did its job, and achieved its primary objective. ?? ?? ?? ?? Afzol Ahmed- Media coursework ...read more.