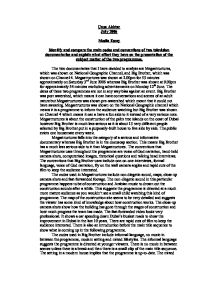 Identify and compare the main codes and conventions of two television documentaries and explain what effect they have on the presentation of the subject matter of the two programmes.

The fast-forwarded video looks very professional. It shows a car speeding down Dubai's busiest roads to show the improvement in Dubai in the last 10 years. There are rapid cuts of film to keep the audience interested. There is also an introduction before the main title sequence to show what is coming up in the following programme. The codes used in Big Brother include informal language, no music in between the programme, modern setting and mixed lifestyles. The informal language suggests the programme is directed at younger viewers. There is no music in between scenes unless there is a break and then there is a small clip of the main title sequence. The setting in a modern house implies that the programme is up-to-date. The mixed classes and lifestyles suggest that the programme is aimed at a much more educated audience as well as other people. The conversations shown in this programme range from a wide variety of topics such as jobs to make-up to tasks set by Big Brother. ...read more.

This gives Big Brother an edgy kind of stage. Even though there are no interviews with experts, this documentary still has a very professional feeling. The voice of God narrations states the date and time of each clip. There is no serious message conveyed in this documentary. No hand-held camera shots are used and this adds to the professional look of the programme. Both of these documentaries use very similar codes and conventions, yet they are also very different. They both use codes like sound and setting and they both use similar conventions like voice of God narration and language. Each programme has an individual way of presenting the information they have collected - both are very interesting thoughtful. The documentaries have a very thorough look on what they are presenting g and presented it in the way they thought best. One documentary was very quite serious and the other one was much less informative but still very interesting. They both have techniques they use to keep the audience interested for the rest of the programme. ...read more.