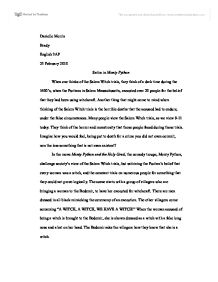 In the move Monty Python and the Holy Grail, the comedy troupe, Monty Python, challenge societys view of the Salem Witch trials, but satirizing the Puritans belief that every woman was a witch, and the constant trials on numerous people for somethin

When one thinks of the Salem Witch trials, they think of a dark time during the 1600’s, when the Puritans in Salem Massachusetts, executed over 20 people for the belief that they had been using witchcraft. Another thing that might come to mind when thinking of the Salem Witch trials is the horrible deaths that the accused had to endure, under the false circumstances. Many people view the Salem Witch trials, as we view 9-11 today. They think of the horror and monstrosity that those people faced during those trials. Imagine how you would feel, being put to death for a crime you did not even commit, non the less something that is not even existent?

In the move Monty Python and the Holy Grail, the comedy troupe, Monty Python, challenge society’s view of the Salem Witch trials, but satirizing the Puritan’s belief that every woman was a witch, and the constant trials on numerous people for something that they could not prove logically. The scene starts with a group of villagers who are bringing a woman to the Bedemir, to have her executed for witchcraft. There are men dressed in all black mimicking the ceremony of an execution. The other villagers come screaming “A WITCH, A WITCH, WE HAVE A WITCH!” When the woman accused of being a witch is brought to the Bedemir, she is shown dressed as a witch with a fake long nose and a hat on her head. The Bedemir asks the villagers how they know that she is a witch.

The villagers reply stating that she looks like one. The woman defends herself with saying that the villagers dressed her that way. The Bedemir begins to ask them questions about what proof they have that she is a witch. After going back and forth with ridiculous reasons as to why she should be executed, the Bedemir tells the villagers how to really determine if she really is a witch. He tells them that witches are made out of wood, and that wood floats in water, as do ducks, so if she weighs the same a duck then she is made out of wood, which makes her a witch. At this point in the scene you see the women in dismay because she realizes that, that his theory makes no sense, while the villagers are existed and restless to burn the “witch.”

By Monty Python burlesquing the Salem Witch trials, it brings a sense of humor to a very dark time in history. It lets the audience laugh about the ignorance of the Puritans during the 1600’s and their strive for death. In a different perceptive some of the audience might be offended by the reference toward the Puritan’s method of trial. Some could believe that Monty Python is poking fun and Americans in general and how we go about punishment.  Since the Salem Witch trials is such a mournful time in our history, Monty Python makes such a contrast by lightening up the horror in the situation, and making it humorous.

When watching Monty Python and the Holy Grail, or and parody, one must watch with a open mind. When you think too much into what the authors, or directors are trying to get across, you become offended. As an audience member myself and a person with some knowlage of the Salem Witch trials, I believed that the scene was hilarious. I mean what’s funnier then a bunch of idiots dressing a women up as a witch, and trying to find ways to make her a witch?