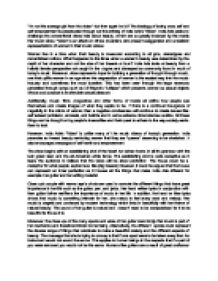 India Aries Video is unlike many of the music videos of todays generation. India promotes an inward beauty reminding women that they are queens deserving to be cherished. It also encourages messages of self wort

"I'm not the average girl from the video"-but then again ho is? The ideology of loving ones self and self empowerment is perpetuated through out the entirety of India Arie's "Video". India Arie seeks to challenge the conventional views held about beauty, which are so greatly indorsed by the media. Her music video, "Video" is an attack on others musicians who present exaggerated and unrealistic representations of women in their music videos. Women live in a time when their beauty is measured according to stigma, stereotypes and romanticised notions. What happened to the times when a woman's beauty was determined by the depth of her character and not the size of her breasts or bum? India Arie looks at beauty from a holistic female perspective not caught in the dogma and disrespect so commonly found in much of today's music. Moreover, video represents hope for building a generation of thought through music; one that uplifts women in an age when the degradation of women is the easiest way into the music industry and sometimes the most lucrative. This has been seen through the large revenues generated through songs such as Lil Wayne's "Lollipop" which presents women as sexual objects whose soul purpose is to stimulate sexual pleasure. ...read more.

This shows the beautiful side of a part of the female anatomy she presents bums in a classy way that contrasts the degrading manner that they are often portrayed. In having "love yourself" presented before she mounts the bike India implies that self-love is the foundation needed when people embarking on a journey of self-discovery. Her guitar has a personal touch, each cord is colour coded with the colours that always appear on her: orange, yellow and green. This is used to show the different types of expressions that can co-exist within one being. Moreover, the pattern on the guitar is also on her clothes. Mis en scene is used to connote: warmth, new beginnings and nature. The colours associated with India are very demure which helps the audience warm to her. This is greatly contrasted by the clothing worn by the video girls. Mis en scene is cleverly used to highlight that despite the girls being form different cultures they are all dressed the very similarly. This shows that conformity reaches everyone .India is very carefree her appearance unlike the video girls who take every given opportunity to look at themselves, even using a window as a mirror. ...read more.

Her orange scarf and guitar go through her journey with her although she wants to sell her music she always carries a part of home with her to remind her of who she is. She wants to sell her music but not at the expense of her dignity. In the last shot she is dressed in white, behind her is a billboard stating "locally grown" which shows that she has not lost her roots and remains grounded despite her fame. She knows where she is from and refuses to allow conformity to alter who she is. Nevertheless, "locally grown" could imply that the responsibility to educate children about self worth and beauty lies with the parents. Moreover, her being dressed in white not only symbolises the purity of her appearance and how 'real' she is but it also symbolises the purity of the music that is so integral to her being. India never allows her music to be tainted by deprecating terms or demeaned by scantily clad models. She preserves the old saying beauty is in the eye of the beholder and campaigns for natural beauty in an industry that is littered with falseness. India Aries video encourages people to look beyond the superficial fake breasts and the air brushed images that delude people into want to strive for an unrealistic goal at the price of their self-worth. ...read more.