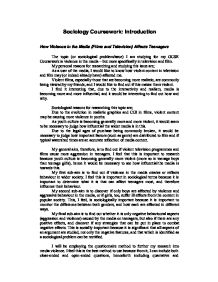 Sociology Coursework: Introduction How Violence in the Media (Films and Television) Affects Teenagers The topic (or sociological problem/issue) I am studying for my GCSE Coursework is violence in the media - but more specifically in television and film. My personal reasons for researching and studying this issue are; As a user of the media, I would like to know how violent content in television and film may (or indeed already have) affected me. Violent films, especially those that are becoming more realistic, are commonly being viewed by my friends, and I would like to find out if this makes them violent. I find it interesting that, due to the interactivity and realism, media is becoming more and more influential, and it would be interesting to find out how and why. ...read more.

are distributed to film and if typical watershed times are an accurate reflection of media content. My general aim, therefore, is to find out if violent television programmes and films cause more aggression in teenagers. I feel that this is important to research because youth culture is becoming generally more violent (more so in teenage boys than teenage girls), hence it would be necessary to see how influential the media is towards this. My first sub-aim is to find out if violence in the media creates or reflects behaviour in wider society. I feel this is important in sociological terms because it is important to determine what it is that can affect teenagers most, and therefore influence their behaviour. ...read more.

This is socially important because it is significant that all aspects of an argument are studied, not only the negative features, and that which is identified as a sociological problem can be rectified. I will be employing the questionnaire method to further my research into media violence. I feel this is the best method to use because from it, I can include both close-ended and open-ended questions, henceforth including quantative and qualitative data. This then makes my work in the boundaries of 'realism' - both valid and reliable. I will be examining the background theories and research of many sociologists. For natural studies, I shall look at Hennigan (1972) and Williams (1986). Belson (1978) and Lefkowitz (1972) will be studied for longitudinal. Field experiments I shall look at include Stein and Friedrich (1972) and Parke (1977). I shall also focus my attention on Brown and Pennall's (of 1998) research, and the work of Bardula. ...read more.