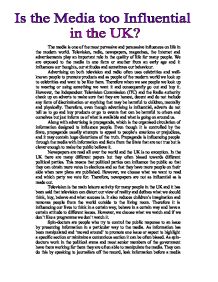 Is the media too influential in the UK?

The media is one of the most pervasive and persuasive influences on life in the modern world. Television, radio, newspapers, magazines, the Internet and advertisements play an important role in the quality of life for many people. We are exposed to the media in one form or another from an early age and it influences our thoughts, our attitudes and sometimes our behaviour. Advertising on both television and radio often uses celebrities and well-known people to promote products and as people of the modern world we look up to celebrities and want to be like them. Therefore when we see people we look up to wearing or using something we want it and consequently go out and buy it. However, the Independent Television Commission (ITC) and the Radio authority check up on adverts to make sure that they are honest, decent and do not include any form of discrimination or anything that may be harmful to children, mentally and physically. ...read more.

However, we choose what we want to read and which party we vote for. Therefore, newspapers are not as influential as is made out. Television is the main leisure activity for many people in the UK and it has been said that television can distort our view of reality and defines what we should think, buy, behave and what success is. It also reduces children's imagination and removes people from the world outside to the living room. Therefore it is influencing our lives to think in a certain way, behave in a certain way and have a certain attitude to different issues. However, we choose what we watch and if we don't like a programme we don't watch it. Spin-doctors are people who try to control the public response to an issue by presenting information in a particular way to the media. As information has been manipulated and 'moved around' to promote one issue or aspect to highlight a specific section or minimize a contentious section it can be often biased. ...read more.

However, the PCC is regulated by the Press and therefore there can be a higher chance of it being biased and is able to say that newspapers are not breaking the law as it is in 'the Public Interest' even if it isn't. This means that we are told about incidents that the government don't want us to know and not told about incidents that we would like to know therefore we are being influenced and believe what is written even though if it is not true. Even though media is very influential in the UK, we choose what we want to watch on television, listen to on the radio and what we read. This suggests that we select what influences us and we behaviour and think it the way that we want. This does not say that media is not too influential but we decide on what areas that we take notice in, believe and act upon. ...read more.