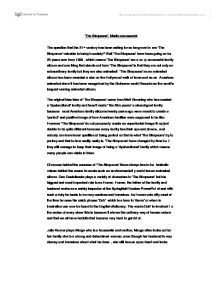 Is 'The Simpsons' still relevent?

Julie Kavner plays Marge who is a housewife and mother, Marge often looks out for her family she is a strong and determined woman, even though her husband is very clumsy and immature about what he does , she still has an open heart and looks beyond the image of her unusual husband. Marge sends a message to all women saying that life isn't as hard as it seems because if she can live up to Homer's way of acting then all woman should be able to be just as strong. There are lots of women who can identify this in their lives and try and use Marge's example. Nancy Cartwright plays mischievous and rebellious 10 year old unintelligent Bart who chooses to do things his own way most of the time but always has his sensitive side showing just as his rebellious. Bart's relationship isn't as strong with his father because they tend to argue quite frequently about things that are not relative. Bart has always doubt his father because he find a way of putting Bart down most of the time this is why Bart always wishes their next door neighbour Ned Flanders was his own father. ...read more.

Homer goes in the voting booth and decides to vote for McCain, however he presses McCain's button as a joke then decided to vote for Obama who really intended to Vote for, anytime he tried to Vote for president Obama the machine would always add extra points for McCain. This was happening around the time of the elections as well as a political issue could this be politic issue in the society as well? Apart from political issues 'The Simpsons' contains nature in using popular culture, An example is 'The Simpsons Movie' were greenday perform but at the end they end up discussing environmental issues this follows up when the People of Springfield throw food on the group. The ship they are singing on starts to sink then they play the emotional song which happened in the 'Titanic' which is a true story. This is popular culture because people have seen the film in reality. Also in the movie 'Arnold Schwarzenegger' who is the president of the United States has a lot of problems. Overall, I believe that 'The Simpsons' is still relevant today because it is still popular, many people watch the show and admire all the work behind it. ...read more.