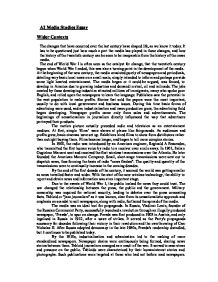 A2 Media Studies Essay Wider Contexts The changes that have occurred over the last century have shaped life, as we know it today. It has to be questioned just how much a part the media has played in these changes, and how the history of the twentieth century can be seen to be inseparable from the history of the mass media. The end of World War I is often seen as the catalyst for change, that the twentieth century begun when World War I ended, this was also a turning point in the development of the media. At the beginning of the new century, the media consisted purely of newspapers and periodicals, detailing very basic local news on a small scale, simply intended to inform and perhaps provide some light hearted entertainment. The media began or it could be argued, was forced, to develop in America due to growing industries and demand in steel, oil and railroads. The jobs created by these developing industries attracted millions of immigrants, many who spoke poor English, and relied upon the newspapers to learn the language. Publishers saw the potential in the vast population to make profits. Stories that sold the papers were the most important, usually to do with local government and business issues. During this time basic forms of advertising were used, and as industrialisation and mass production grew, the advertising field began developing. Newspaper profits came only from sales and advertisements. The beginnings of sensationalism in journalism directly influenced the way that advertisers portrayed their products. The motion picture actually preceded radio and television as an entertainment medium. At first, simple 'films' were shown at places like fairgrounds. As audiences and profits grew, basic cinemas were set up. Exhibitors hired films to show from distributors rather than outright buying them. Films became longer, and began to tell more complex stories. In 1900, the radio was introduced by an American engineer, Reginald A Fessenden, who transmitted the first human voice by radio to a receiver over a mile away. ...read more.

Confidence returned, and banks began to restart transactions. Listeners felt they were being spoken to personally, in contrast to the feeling of being addressed anonymously as in the newspapers. Adolf Hitler, the leader of Germany, invaded Austria on March 13, 1938. He first obtained Sudetenland from the Czechs by signing the Munich Pact. Before then, cultural and human interest stories of radio networks in Europe were re-broadcast in America. Edward R. Murrow, at first an unknown correspondent who had become the European news chief of CBS in 1937, improvised the first coordinated radio broadcast to America from multiple European locations. During the 20-day period of diplomatic talks in Munich, America heard live broadcasts from 14 European cities. The voices of Hitler, Czech President Benes, British Prime Minister Chamberlain and Italian dictator Benito Mussolini were heard first-hand. The radio coverage of the Munich crisis confirmed its power to inform and influence its audience. Radio helped the war events become a reality to those far away from it. Radio advertising bloomed. The messages of radio advertising were similar to that of mass magazine advertising. Advertisers paid less attention to the special qualities and focused more on what people wanted or hoped to be. They claimed their products helped people feel young, rich and envied Throughout the 1930s, David Sarnoff, president of Radio Corporation of America, started the force to develop the television. In 1937, 17 experimental television stations emerged. Television was publicly introduced at the 1939 World's Fair in New York. The phenomenon of bringing both pictures and sound to a home audience would soon shake the position of radio and print media. However, World War II continued to prevent its development. During the 1930s and 1940s, five large companies dominated the American film industry: Fox, MGM, Warner Brothers, Paramount and RKO, while Rank and ABPC dominated the British film industry. Some of the most famous films of all time were made during this period: Gone With the Wind in 1939, Citizen Kane in 1941 and Casablanca in 1942. ...read more.

Everyone was plugging in for what was to come. The Internet links people together through their computer terminals with modems connected to telephone lines. A web of networks and software allows users from all around the world to communicate with one another. The Internet is now open to the world. The number of people accessing the net at any one time is unsure, though it is probably in the tens of millions. This also means that most of the content on the Internet is unfiltered and unchecked. The debate over content and public access of web sites will go on into the 21st century. Advertising in the mid-1990s evolved greatly with the rapid growth of the Internet. However, online advertising was relatively modest because the Internet was very new and its effectiveness was uncertain. The total advertising revenue in 1997 was estimated at $400-$699 million, 12 times more than that of 1995, but still only a small portion of all advertising spending. One new advertising mixture to take hold of the Nineties was the "advertorial". Which resembles regular columns or features, biased advertisements posing as unbiased editorials. Cross-marketing and media consolidation have become more widespread in the 1990's. A network station owned by Disney began having more talk shows visit Disneyland or mentioning their films. Movie tie-ins with fast food chains and breakfast cereals dominate advertising during children's programming. Wireless communications continued to develop in the 1990s. Cordless phones, pagers and mobile phones are becoming more commonplace. The nineties also saw the introduction of wireless computer networks, direct-broadcast satellite television, digital wireless cable TV networks and a global phone service. As we enter the 21st century, technology is developing to make these systems cheaper, more reliable and easier to use. The impact of such technology and communication tools is phenomenal. However, who knows what the future holds, how will the media expand, change, evolve in one week, or one decade. When globalisation and technology set the pace, the media play a key role in the life of the world. They not only relate the facts, but undeniably exert some influence on them too. ...read more.