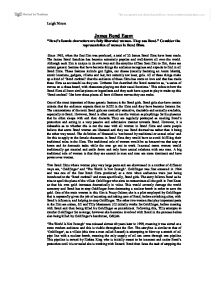 James Bond - Bond(TM)s female characters are fully liberated women. They use Bond. Consider the representation of women in Bond films.

James Bond Essay "Bond's female characters are fully liberated women. They use Bond." Consider the representation of women in Bond films. Since 1962, when the first film was produced, a total of 22 James Bond films have been made. The James Bond franchise has become extremely popular and well-known all over the world. Although each film is unique in its own way and the storyline differs from film to film, there are certain generic features that have become things the audience recognises and expects to find in all Bond films. These features include gun fights, car chases (usually featuring an Aston Martin), exotic locations, gadgets, villains and last, but certainly not least, girls. All of these things make up a kind of 'Bond cocktail' that the audience of these films has come to love and that has made these films as successful as they are. Umberto Eco described the Bond narrative as, 'a series of moves on a chess board, with characters playing out their usual functions.' This refers to how the Bond films all have similar pieces or ingredients and they each have a part to play to make up this 'Bond cocktail' like how chess pieces all have different moves they can make. One of the most important of those generic features is the Bond girls. Bond girls also have certain criteria that the audience expects them to fulfill in the films and they have become famous for. The connotations of the term Bond girls are normally attractive, desirable and sexually available, especially to Bond. However, Bond is often seen to use the women as playthings for his pleasure that he often sleeps with and then discards. They are regularly portrayed as needing Bond's protection and acting in a very passive and submissive manner towards Bond. However, it is debatable as to whether this is not the case with all women in Bond films and some people believe that some Bond women are liberated and they use Bond themselves rather than it being the other way round. ...read more.

She also misses Goldfinger when she tries to shoot him and then later on she is making lots of noise in the forest when Bond is silent. These things show that she isn't as skilled as Bond and it suggests that women aren't supposed to be doing the kind of work Bond does and they are incapable. It is when they are in the forest that Bond takes control and Tilly starts to become more like her sister was before she died. She becomes more passive and follows Bond's orders. Her hair is also down now, which seems like a very minor change but it symbolises the fact she has turned into more of a typical Bond girl. Then Bond there is a car chase and Tilly appears to admire Bond and all the gadgets he has in the car and even smiles a bit when before she had been serious the whole time. Bond's charm also seems to start to take an affect on her now, which suggests that all women become attracted to Bond after a while and supports the idea that Bond girls can't resist Bond. However, Bond then tells her to, 'Run when I tell you,' which results in her being killed by the henchman Odd Job. Bond at first seems quite concerned and runs over to her, but then he seems to shut out his emotions once again and puts her behind him. This is similar to how he reacted when Jill died, it just seems to annoy him a bit and apart from that he doesn't seem to care. The main female character in 'Goldfinger' is Pussy Galore and the first thing that is noticeable is her name. The name is very suggestive and another name that is a bit suggestive is Doctor Molly Warmflash from 'The World Is Not Enough'. Those names are another example of the sexual innuendo that is in both of the Bond films and the name of Pussy Galore could have come from the fact that in the book written by Ian Fleming that the film is based on, Pussy was a lesbian. ...read more.

Where as, in 'The World Is Not Enough' nearly all of the female characters have power and a big role to play. It is also the only film where any women have power over Bond, because M is obviously his boss and at times Elektra King has power over him as well. This proves that Bond is not always on control of women. This change in attitude over time is most likely because attitudes towards women changed and they gained equality with men by the time 'The World Is Not Enough' was made, while they were still moving towards equality at the time 'Goldfinger' was released. These historical factors are the most likely reason for the kind of evolution of Bond girls to the point where they sometimes control and out-smart Bond where as he used to always have power over them. Overall, Bond girls do appear to be liberated to a certain extent because they are not always bound by traditional sexual roles, which is shown by the way they are sometimes on top and in control in bedroom scenes. However, there are many instances where Bond has power and control over women and nearly every woman in the films seems to find him irresistible, which suggests that Bond girls are not completely liberated because they still appear in a lot of aspects to be inferior to men. Although, in the more recent films, Bond girls seem to be liberated in nearly all aspects they still don't appear to be quite there yet. I think Bond girls never will be fully-liberated either, simply because if they were they wouldn't be fulfill the well-known criteria of Bond girls and would therefore ruin the Bond cocktail. However, I may be wrong and, referring back to the quote by Umberto Eco, perhaps Bond girls could be the queen in the game of chess and they have the ability to move in any direction making possible for them to change without ruining the formula. ?? ?? ?? ?? Leigh Nixon ...read more.