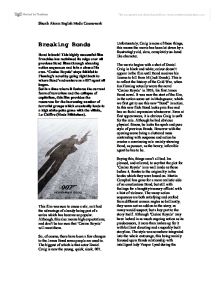 Breaking Bonds Bond is back! This highly successful film franchise has reclaimed its reign over all previous Bond films through stunning action sequences and is in a class of its own. 'Casino Royale' stays faithful to Fleming's novel by going right back to where Bond's adventure as a 007 agent all began. Set in a time where it features the current fears of terrorism and the collapse of capitalism, this film provides the resources for the increasing number of terrorist groups which eventually leads to a high stake poke game with the villain, Le Chiffre (Mads Mikkelsen). This film was sure to cause a stir, as it had the advantage of already being part of a series which has become so popular. Although, this also means high expectations, and don't be too sure that 'Casino Royale' will meet them. So, of course, there have been a few changes to the James Bond some people are used to. The biggest of which is that actor Daniel Craig is now the young, quick, sleek, 007. Unfortunately, Craig is none of these things; this means the movie has been let down by a frustratingly old, slow, completely un-bond like character. ...read more.

Martin Campbell has gone for a more realistic side of an emotionless Bond, but still with feelings for a haughty treasury official with a hint of violence. The many action sequences are both satisfying and crafted from different camera angles so brilliantly, they seem not an add-on to the story, as many would suspect, but a key part to the story itself. Although 'Casino Royale' may have lacked in as much ongoing action as its predecessors, it more than makes up for it with brilliant directing and a superbly built storyline. The style was somehow integrated into the whole entourage, this being mainly focused upon Bonds relationship with intelligent lady Vesper Lynd during the second part of the film, showing two sides to the 007. The action packed movie is filmed in numerous locations including the Bahamas, Madagascar, Venice and the UK. These locations show that Bond is action packed wherever he is. There is enough action in the movie, but on the other hand Martin Campbell has also included romance scenes. A beach scene that takes place in the Paradise Island; Bahamas previews a whole different side to the new Bond, the beach scene is full of romance, but is also realistic by confronting Bond and Solange (Caterina Murino) ...read more.

This, I'm afraid, is showing a slightly more vulnerable side to him, he makes mistakes, he isn't always in control. Compared to previous movies in the Bond series there are not enough gadgets, but this makes the movie more realistic. On the other hand for you die hard action fans the traditional gadget packed Aston Martin remains in the film along with new gadgets including a first aid kit and a high tech phone that's capable of high tech spying. If you are going to watch this film, don't be too happy about the outcome too soon. Overall, 'Casino Royale' is a movie to watch, filled with great action and the occasional one-liner, it's worth paying a fiver for. Fantastically made, Martin Campbell is nothing less than a genius with some of the scenes he has produced. Unfortunately, for all you die hard Bond fans, your favourite English spy may not be all you expected, but not to fret, just hope he improves by the sequel, if there is one of course. Director: Martin Campbell Writer: Ian Fleming Main Actors: Daniel Craig, Eva Green, Mads Mikkelson, Judi Dench Genre: Action/ Adventure/ Thriller Length: 144 mins UK Release Date: 16 November 2006 Rating: Review by Shuaib Akram ?? ?? ?? ?? Shuaib Akram English Media Coursework ...read more.

This student has written extremely coherently about the film. If this is a review then they have captured the tone and spirit very well indeed. However, the title suggests it should be an analysis which needs far more media language.
***