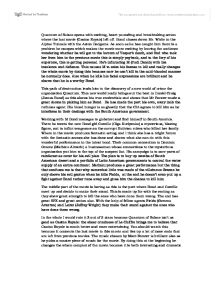 Quantum of Solace opens with exciting, heart pounding and breathtaking action where the last movie (Casino Royale) left off. Bond chases down Mr. White in the Alpine Tunnels with the Aston Dodgems. As soon as he has caught him there is a problem he escapes which makes the movie more exciting by leaving the audience wondering whether he will get to the bottom of Vesper's death, and find who took her from him in the previous movie this is simply payback, and to the fury of his superiors, this is getting personal. He's infuriating M (Judi Dench) with his insolence and defiance. This causes M to seize his license to kill and really changes the whole movie by doing this because now he can't kill in the cold-blooded manner he normally does. Also when he kills his facial expressions are brilliant and he shows that he is a worthy Bond. This path of destruction leads him to the discovery of a new world of crime the organization Quantum. ...read more.

Mathieu produces a great performance but the thing that confuses me is that why somewhat little was made of the villainous Greene he only shows his evil genius when he kills Fields, at the end he doesn't even put up a fight against Bond rather runs away and gives him the chance to kill him. The middle part of the movie is boring as this is the part where Bond and Camille meet up and decide to make their stand. This is made up for with the ending as they show great strength to kill the ones who have done them wrong. The end has great SFX and great action also. With the help of fellow agents Fields (Gemma Arterton) and Leiter (Jeffrey Wright) they make their stand against the ones who have done them wrong. In the whole I would rate it 3 out of 5 stars because Quantum of Solace isn't as good as Casino Royale: the shear cruelness of Le Chiffre brings me to believe that Casino Royale is much better and more entertaining. ...read more.

The action is very brutal so the 12A certificate it has been given isn't very suitable with the high action of bombs, guns and some rude words used in the middle so I think that the 12A certificate is very incorrect and I feel that the industry has made a big mistake by giving this a 12A certificate. The movie was a great result in the UK and US box offices and this is reflected by the sales made in the first week of release where it made $1.7 million in the US and �2.7 million in the UK respectively. Under the direction of Marc Forster, the movie shows the adrenalin in a series of thunderous events: car chases, plane wrecks, and motor boat collisions. If it's got an engine, and runs on fuel, then it is perfect to have Bond at the wheel with the way he recklessly does what he wants. QUICK FACT FILE Name Quantum of Solace Release 2008 Countries Rest of the world, UK, USA Cert(UK) 12A Runtime 106 mins Director Marc Forster Cast Daniel Craig, Gemma Arterton, Giancarlo Giannini, Jeffrey Wright, Jesper Christensen, Judi Dench, Mathieu Amalric, Olga Kurlyenko, Stana Katic ...read more.