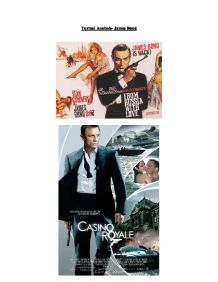 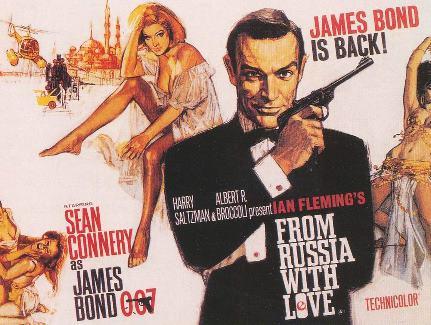 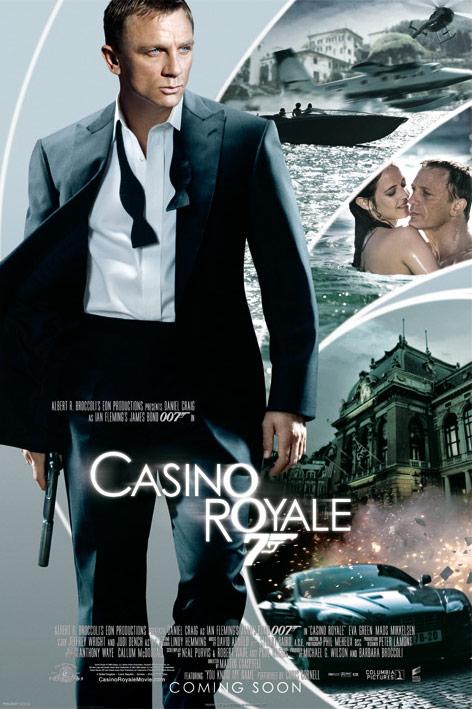 I feel that the primary aim of any film poster is to entice its audience to go and watch the film the poster is advertising. The poster of James Bond from Russia with love (1963) denotates a sophisticated, suited and booted sexy male holding a gun in his right hand. He is facing the audience and has his left hand under his arm. The connotation of this is that he maybe mysterious and hiding something under his arm and the fact that he is holding a gun and smiling suggests that he is dangerous yet provocative and seductive and could possibly be friendly. The eye contact is directly forwards to catch the passers by eye and make it look as if he is staring at you.  The gun connotes violence, power and action which attracts both male and female audiences.  He is also wearing a suit which connotes that he is classy and sophisticated.  This attracts female audience as it titillates them.

Other features used in the poster are the use of images behind the central image of James Bond to show a glimpse of what the film has to offer and an indication of what the film contains. The denotation of most of the images are of two women wearing very little clothing who look as if they have been seduced by James Bond and as if they are totally bewildered by him, they all look aroused, this also connoted that the film contains sexual scenes and this attracts male audience as it titillates them. The other image is of a helicopter, a train and a big building. All of the images connote action which could happen at different places in the film and the use of advanced technology which was not common at this time.

Under the central image you see the title “from Russia with love” which is printed in bold and a font commonly used during this time. The connotation of the title “from Russia with love” could be that James Bond could be Russian or that he has gone from Russia to somewhere else to carry out a task on behalf on Russia. On top of the central Image you can see the words “James Bond is back.” This connotes that this is not the first James Bond film to be released so fans of the other films would be immediately interested in the film. Also the caption on the left “Sean Connery as James Bond” would be a major factor affecting the popularity of the film because Sean Connery is a well loved and admired actor hence attracting a wide range of audience to watch the film. Even today Sean Connery’s films sell very well and make a huge amount of money at the cinema. Ian Fleming who wrote the book has his name next to the central image which also would attract a wider range of audience who read his book might want to see the film version of it.

The denotations of the use of colours are mainly white with black and red. The white is used in the title to contrast it to the rest of the poster and so that it stands out. The colour black connotes evil and iniquity where the colour red connotes anger, blood and violence. The use of the contrasting bright colours catches the eye of any passer by effectively.

The other poster “James Bond Casino Royale (2006) is simple yet effective and eye catching. The central image is of a young attractive male wearing a suit and holding a gun in his right hand. We automatically presume he is the main character. The title of the film “Casino Royale” is directly below him to put emphasis on the title and show he has a close connection to the title. The title “Casino Royale” connotes that the film may be set in a casino and the word “Royale” suggests some sort of royalty and elegance. The denotation of the central image is that the young James Bond is wearing Tuxedo style suit but he has his bow-tie open and his top buttons undone. This connotes that he is sophisticated yet has his own sense of style. He wears his suit in a casual way. He is also staring to the left in a manner which makes him look angry and provocative and as if he is meaning to attack someone. The Connotation of the stare implies that he is dangerous, threatening and fearless but at the same time a bit sexy. The fact that he is also holding a gun again connotes violence, power and action just like the first poster but in this poster he looks much more menacing.

Another convention used in the poster is the use of images to depict the film (like the first poster does) but the images in this poster are much more detailed and give a greater insight.  There are two images of scenes of action and the denotation of the first image is a high speed chase between a helicopter, a plane and a boat. The denotation of the second image is a flashy super car driving away from an exploding building. Both of these images connote violence and action which is extremely titillating to men as well as the next image. The final image is of James Bond naked in the water with a beautiful woman. This connotes that the film will have romance as well as the other genres. The theme of romance could attract a wide female audience as they watch this a lot as well as having a handsome actor. The images overall connote violence, action and romance.

Another convention used is the actor who plays James Bond in Casino Royale. The actor is Daniel Craig who recently has shot to fame and has starred in a string of box office hits. He will be very popular with teens both male and female. The lady on the poster is Katie Holmes who is also a successful actress and would be very appealing to men making them want to watch the film. The denotations of the main colours used in the poster are blue which as you go down gets darker. This connotes calmness and that maybe James Bond is really calm and controlled deep down and has another side to him. The poster also has the cast and credits at the bottom of it so any one looking at it may recognise their favourite actor.

Both the poster denotate a masculine male wearing a suit are both provocative yet sexy. Both the males are holding a gun in the right hand which connotes violence and power but the fact that the gun is in the right hand and not the left could connote that they are using it for a good reason. I believe that both the posters are targeted primarily at male audiences who loathe action and adventure films. Both of the posters also show contemporary style and the genre of action. They both also have the same U.S.P (Unique Selling Point) which is the main actor who plays James Bond.

Overall I feel that both of the posters were persuasive and alluring to the viewer to make them watch the film. Saying this I feel that the first poster was better because it does not reveal too much unlike the modern one which for me reveals too much. I feel that the historical poster is much more stylish and because it is like a painting it is different and makes it more appealing. This proves that just because something is newer is does not always make it better than something older.