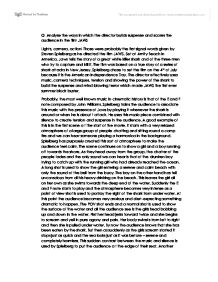 Q Analyse the ways in which the director builds suspense and scares the audience in the film JAWS Lights, camera, action! Those were probably the first signal words given by Steven Spielberg as he directed the film JAWS. Set at Amity Beach in America, Jaws tells the story of a great white killer shark and of the three men who try to capture and kill it. The film was based on a true story of a series of shark attacks in New Jersey. Spielberg chose to set the film on the 4th of July because it is the American Independence Day. The director effectively uses music, camera techniques, tension and showing the power of the shark to build the suspense and mind-blowing terror which made JAWS the first ever summer block buster. Probably, the most well known music in cinematic history is that of the E and F note composed by John Williams. Spielberg trains the audience to associate this music with the presence of Jaws by playing it whenever the shark is around or when he is about t attack. He uses this music piece combined with silence to create tension and suspense in the audience. A good example of this is in the first scene a t the start of the movie. ...read more.

When the shark leaves all is quiet again as before like nothing has happened. Spielberg also uses astounding camera techniques to create anticipation and terror in the movie. They were the ground breaking camera techniques for the 70's. An ideal example his camera techniques is the scene of the second shark attack. At the beginning a medium shot (MS) is used to show a robust woman walking into the sea from the beach. The setting is very sunny and cheerful with the hustle and bustle of the people on the beach. Spielberg purposely makes it look this way to lull the audience into a false sense of safety so they would not expect a shark attack at any moment. A medium tracking shot is used to follow a boy who just came out of the water. In the background we can see a lot of cheerful people on the beach sunbathing. Again, Spielberg wants his audience to feel comfortable. The camera then closes up on Brodie's side profile and we can see him surveying the sea with a worried and apprehensive look on his face. Spielberg then uses a variety of shots to show the beach and the calm sea with the robust woman floating in one of its parts. ...read more.

Unfortunately when the shark does bite on the roast it yanks it so hard that half of the jetty comes off taking one if the men with it. Luckily he is able to narrowly escape from the assault of the shark. The second example is when Hooper is lowered into the sea in an iron so-called shark proof cage t fire a poisoned dart at jaws. Sadly the shark rams the cage so hard that its iron bars bends so much that he makes a hole in it. After this he chews the bar of trying to eat Hooper. But he is able to escape by hiding behind one of the corals. The cage wasn't shark proof after all. This makes the audience feel it is so strong that nothing can hold it off. It is unstoppable. Spielberg also uses the character's reactions to panic the audience even more. When the shark began to consume Alex, an extreme close up shot is used to show Brodie's terrified reaction to it which makes the audience empathize with him and therefore feel as terrified as he does. An alternative instance of Spielberg's use of empathy is when Hooper was being attacked in the iron cage. The camera zoomed in a close up of his face and even with goggles on we could still see a look of horror in his eyes. ...read more.