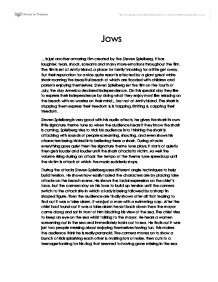 Jaws ... Is just another amazing film created by the Steven Spielberg. It has laughter, tears, shock, screams and many more emotions throughout the film. The film is set at Amity Island, a place for family's looking for a little get away. But their reputation for a nice quite resort is effected by a giant great white shark roaming the beautiful beach of which are flooded with children and parents enjoying themselves. Steven Spielberg set the film on the fourth of July, the day America declared independence. On this special day they like to express their independence by doing what they enjoy most like relaxing on the beach with no worries on their mind... ...read more.

As well the volume rising during an attack the tempo of the theme tune speeds up until the victim is attack at which the music suddenly stops. During the attacks Steven Spielberg uses different angle techniques to help build tension. He shows how easily fooled the characters are by placing fake attacks on the beach scene. He shows the facial expression on the chief's face, but the camera stay on his face to build up tension until the camera switch to the attack site in which a lady is being followed by a sharp fin shaped figure. Then the audience are finally shown after all that teasing to find out it was a false alarm, it was just a man with a swimming cap. ...read more.

The camera moves on to show a bunch of kids splashing each other & making lots of noise, then cuts to a teenager looking for his dog that seemed to having gone missing in the sea. This then puts fear into the audience as well as confusion. Then the shark if finally shown to the audience, the camera shows the sharks POV. Its shows the sharking looking at its next victim and getting ready to attack. The chief notices the shark then suddenly stands up with fear and warns the children. All the children start screaming and the parents run down to the children to retrieve them. The camera shows the victim being eaten up by the giant great white shark. The camera show the victim's mother and her negative emotions are expressed through shouting and tears. ...read more.