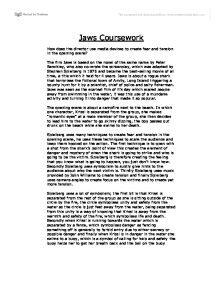 Jaws. How does the director use media devices to create fear and tension in the opening scene?

Jaws Coursework How does the director use media devices to create fear and tension in the opening scene? The film Jaws is based on the novel of the same name by Peter Benchley, who also co-wrote the screenplay, which was adapted by Stephen Spielberg in 1975 and became the best-selling movie of all time, a title which it held for 4 years. Jaws is about a rogue shark that terrorises the fictional town of Amity, Long Island triggering a bounty hunt for it by a scientist, chief of police and salty fisherman. Jaws was seen as the scariest film of it's day which scared people away from swimming in the water, it was this use of a mundane activity and turning it into danger that made it so popular. The opening scene is about a campfire next to the beach. In which one character, Krissi is separated from the group, she makes "romantic eyes" at a male member of the group, she then decides to lead him to the water to go skinny dipping, the boy passes out drunk on the beach while she swims to her death. ...read more.

Secondly when Krissi is running towards the water which is separated by a fence, which symbolises danger as fencing something off is generally to forbid entry due to either secrecy or possible danger and finally when Krissi is in danger in the water she swims to a buoy, which is a symbol of calling for help and safety the buoy helps her to get her breath back and the bell on the buoy rings, but to no avail. The buoy is also a symbol of relief for Krissi as she finally has a chance to be safe and recover but Jaws still has access to her legs and she is, unsurprisingly killed. Music plays a large factor in Jaws and scene 1 is no exception, the iconic theme tune has become a regular representative sound of fear and suspense. The music has great effect because the repetition and gradual build up adds to the tension and build up. The same piece of music is repeated every time Jaws attacks throughout the film and doesn't only represent fear but it represents the shark. ...read more.

The first point of view shot is at the start of the movie when there is a shot of some seaweed in the sea, this is obviously from the point of view of Jaws. The second shot is from the view of Eugene (Krissi's love interest) looking towards Krissi, which evidently gives the impression of romance between the pair. Pan shots are the third type of major shot in the first scene as it is used in more than just the campfire part. It is also used when Krissi swims out into the water, you can see the sunset, a buoy and the silhouette of Krissi before you see her suddenly drop to the water. This pan shot creates the brief illusion that everything is normal in a beautiful seaside town, but things soon turn ugly. So, to summarise, the techniques used in the first scene of Jaws include symbolism, music, ambient noise and camera angles. This is what made Jaws a revolutionary film that transformed the genre of horror into what it is today. When you watch the film you don't really think it's that special but when you compare it to other films of a similar genre at the time, it was something special. ...read more.