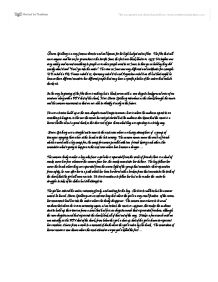 Steven Spielberg is a very famous director and well known for his high budget action films. The film that will scare anyone and live on for generations is the terrific Jaws, the first ever block bluster in 1975. His tagline was very catchy and meant something to people as in when people went to see Jaws, to then go on holiday they did exactly what it said "Don't go into the water". The view on Jaws was very different and certificates for example: U.K rated it a PG, France rated it 12, Germany rated it 16 and Argentina rated it an 18 but that might be because those different countries has different people that may have a specific phobia of the waters that include sharks etc. ...read more.

Steven Spielberg uses a straight cut to move to the next scene where a relaxing atmosphere of a group of teenagers enjoying their selves at the beach in the late evening. The camera moves across the circle of friends which is cored with a big camp fire, the camp fire comes parallel with two friends kissing each other, this connotates what is going to happen in the next scene where love becomes a danger... The camera slowly reaches a boy who faces a girl who is separated from the circle of friends; there is a cloud of smoke across her face whenever the camera faces her, the smoke connotates her dullness. ...read more.

The camera now returns to its usual medium shot where she is seen swimming again, at an instant, the music re-appears, this makes the audience start to build up their tension from a scene that had free sea diagetic sounds that represented freedom, although the non-diagetic sound that represents the shark block all of that out of the way. It takes a few seconds until we can actually see the POV shot of the shark from below the girl, a close up shot of the girl is shown to represent her emotions, it turns from a smile to a moment of death where the girl is eaten by the shark. The convention of horror movies is now shown where the most attractive virgin girl is killed the first... ?? ?? ?? ?? ...read more.