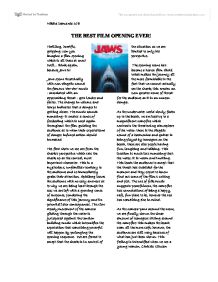 Jaws opens theatrically with non-diegetic sound: the famous der-der music - associated with an approaching threat - gets louder and faster. The change in volume and tempo indicates that a danger is getting closer.

THE BEST FILM OPENING EVER! Thrilling, horrific, gripping: can you imagine a film opening which is all these at once? Well... think again, because Jaws is! Jaws opens theatrically with non-diegetic sound: the famous 'der-der' music - associated with an approaching threat - gets louder and faster. The change in volume and tempo indicates that a danger is getting closer. The music sounds menacing- it creates a sense of foreboding which is used again throughout the film guiding the audience as to when their expectations of danger infused action should increased. The first shots we see are from the shark's perspective which sets the shark up as the central, most important character. This is a mysterious, unfamiliar territory to the audience and so immediately grabs their attention. Spielberg leaves the audience with no easy answers as to why we are being lead through the sea; we are left with a growing sense of suspense, pondering the significance of this journey and its potential later consequences. ...read more.

The use of folk music suggests peacefulness, the campfire has connotations of being a happy, safe, fun place to be, however the sea has something else in mind. As the camera pans around the scene, we are finally shown the shear amount of teenagers sitting around the campfire: this makes the beach seem all the more safe; however, the audience are still wary because of what has just been shown. This feeling is intensified when we see a young woman, Chrissie (Susan Becklinie) sitting alone admiring a young, very drunk man. As the two continue staring at each other, the audience wonder how they are connected to the story. Suddenly a very long shot of the campfire and the sea is shown which reminds us of the opening setting and how these two actors fit into our previous expectations. As Chrissie runs into the sea, stripping off her clothes which symbolises her innocence, the tension building music of the opening grabs the audiences' attention and clearly build expectation of what will follow. ...read more.

Various big close-up and close- up shots of Broody looking out of his bedroom window at the beautiful, irenic sea guides the audience to expect him to be a goodly character and contrasts to the drama of what has just occurred: who would have thought that just the night before, a young, innocent woman got brutally eaten alive by a shark in that very same sea? This introduction of Broody makes the audience think, the shark is not gone! It wants more and until it gets what it wants, it isn't going anywhere and the use of two such contrasting locations in two different times of the day indicates that more gruesome action is on its way! This hide-behind-the-sofa-style movie is definitely on the top of my list! I would most certainly watch this thriller again and again. This film may be some what predictable, however, Spielberg most definitely spices it up with all the full - throttle fun and gut-wrenching action! To find out who the next victim will be, you must watch this gripping adventure movie! By Nikita Damania ?? ?? ?? ?? Nikita Damania 10E ...read more.