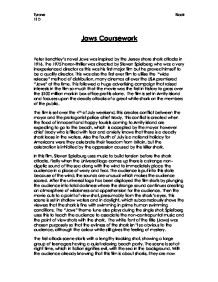 Jaws - Throughout the film the director has used various media devices in order to create suspense, tension and fear in the audience.

Jaws Coursework Peter Benchley's novel Jaws was inspired by the Jersey shore shark attacks in 1916. The 1975 horror-thriller was directed by Steven Spielberg who was a very inexperienced director as this was his first major film but he proved himself to be a quality director. This was also the first ever film to utilise the "wide release" method of distribution, many cinemas all over the USA premiered "Jaws" at the time. This followed a huge advertising campaign that raised interests in the film so much that the movie was the first in history to gross over the $100 million mark in box office profits alone. The film is set in Amity Island and focuses upon the deadly attacks of a great white shark on the members of the public. The film is set over the 4th of July weekend, this creates conflict between the mayor and the protagonist police chief Brody. This conflict is created when the flood of innocent and happy tourists coming to Amity island are expecting to go to the beach, which is accepted by the mayor however chief Brody who is filled with fear and anxiety knows that there is a deadly shark loose in the waters. Also the fourth of July is a national holiday for Americans were they celebrate their freedom from Britain, but the celebration is inhibited by the oppression caused by the killer shark. ...read more.

Chrissie and the man both run off together in the direction of the waterline; the way he pursues her like a predator chasing its prey foreshadowing the actions of the shark. The audience build a bigger connection with Chrissie when we are told her name and the way that she speaks in an angelic tone that radiate innocence. Despite the fact that the man is clearly too drunk to swim, Chrissie carries on into the water, Spielberg evidently following at least one of the traditions of the horror genre: the victim must willingly put themselves into danger. A wide- angle shot makes it clear to the audience that the timing has now drifted into dawn, which Spielberg done purposely knowing that most shark attacks on humans occur at dawn. We can also see from this shot that the only thing on the surface of a huge expanse of sea is Chrissie looking tiny and vulnerable. A medium-close up shows Chrissie's happy face just before cutting to a point of view shot from beneath the water. Again Spielberg flouts media tradition when he uses low-angled shots to show the shark's view, normally more powerful entities look down on minor beings. The dramatic irony (the audience knows the shark is there though the characters do not) created by this drastically increases tension and fright as through the shark's eyes the audience see it get closer to the figure of the surface. ...read more.

This attack is hugely significant to the film as it is the first time the shark is seen in the whole movie. This is again more evidence that with each attack the scene becomes more gruesome and more revealing of the shark's power and size. In all attacks Spielberg personalises each victim by naming them or giving them likable characteristics: Chrissie, Alex (an innocent child), a kind boater who tries to help some children and finally Quint (a brave main character). By making the audience relate to victims personally it intensifies the emotions such as suspense they feel, which can allow for greater manipulation. Throughout the film the director has used various media devices in order to create suspense, tension and fear in the audience. Specialised camera shots-tracking, panning and shots from different angles for example- were used to show attacks from different perspectives and to build up apprehension by revealing visual details via the mise en scene. The Jaws theme music and the shark point of view shots were introduced to forewarn the audience of its presence. Editing also took an important role, with quick-fire cuts being used to create panic, and slower one's distaining the audience's disbelieve. Finally the individual attacks developed as the movie progressed, introducing a new factor each time- the first attack formed a base on which to build upon, the second added to this by involving blood, the third offered a clear view of the shark's colossal head and the film culminates with Quint's and the shark's death. ?? ?? ?? ?? Tyrone Black 11D ...read more.