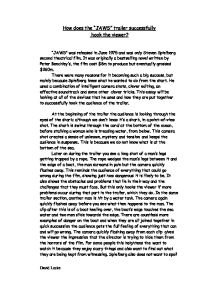 How does the "JAWS" trailer successfully hook the viewer? "JAWS" was released in June 1975 and was only Steven Spielberg second theatrical film. It was originally a bestselling novel written by Peter Benchley's, the film cost $8m to produce but eventually grossed $260m. There were many reasons for it becoming such a big success, but mainly because Spielberg knew what he wanted to do from the start. He used a combination of intelligent camera shots, clever editing, an effective soundtrack and some other clever tricks. This essay will be looking at all of the devices that he uses and how they are put together to successfully hook the audience of the trailer. At the beginning of the trailer the audience is looking through the eyes of the shark; although we don't know it's a shark, in a point-of-view shot. The shark is swims through the coral at the bottom of the ocean, before stalking a woman who is treading water, from below. This camera shot creates a sense of unknown, mystery and tension and keeps the audience in suspense. This is because we do not know what is at the bottom of the sea. Later on during the trailer you see a long shot of a man's legs getting trapped by a rope. ...read more.

Looking through the eyes of Chief Brody implies to the audience that we are hearing what Brody is hearing. This gives the audience the impression that the character is not listening properly to the woman and all of his attention is on what is happening in the water. The trailer then switches to a reaction shot, showing Chief Brody sitting in a chair by the beach. Brody is watching what is happening in the water and this is shown in a point of view shot. The trailer continuously flashes from this point of view shot to the reaction shot of chief Brody. This increases the sense of anxiety and mystery because they do not know what it happening in the water whilst the camera is focused on Brody. At first, the camera changes between each of the different shots slowly and less often, but increases in speed throughout the short film sequence. This increase in change in camera shot replicates the quickening heart beat of a person, creating further anxiety and tension. In a later film sequence, the camera shots children running out of the water, from sea-level height. The camera is side on to the children running from the water. They run across the screen and we are only able to see from the waist down. ...read more.

The sound of splashing and the women's screams really scare the audience because they surprise the audience after the total silence. The theme tune is used in exactly the same manner the next time it is used. This means that the audience then associates the shark attacking with the simple theme tune. The theme tune is meant to resemble a heartbeat, most probably the audience's. As the sharks approaches it's prey, it quickens and gets louder, just like the hearts of the audience when they are scared. This helps to link the theme tune with a sense of fear and anxiety. This is one of the most effective techniques ever used to inject a feeling into the audience. The trailer uses a narrator to control the tone of the trailer and also to help create the feeling of fear and anxiety within the audience. The narrator uses quotes such as: 'It lives to kill', 'a mindless eating machine' and 'It's as if god created the devil and gave him... Jaws.' This creates images in the mind of audience and makes the trailer seem more realistic. It also furthers the feeling of fear within the audience. The "JAWS" trailer was obviously a very good and effective trailer because of the massive success of the film. Spielberg uses many techniques to hook the audience without revealing the plot of the film. He combines all the techniques well to create one of the best trailers ever. David Locke ...read more.