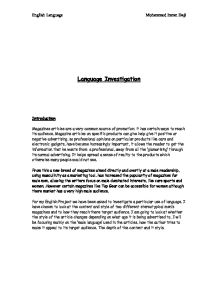 Language Investigation Introduction Magazines articles are a very common source of promotion; it has certain ways to reach its audience. Magazine articles on specific products can give help give it positive or negative advertising, so professional opinions on particular products like cars and electronic gadgets, have become increasingly important, it allows the reader to get the information that he wants from a professional, away from all the 'glamorising' through its normal advertising. It helps spread a sense of reality to the products which otherwise many people would not see. From this a new breed of magazines aimed directly and overtly at a male readership, using masculinity as a marketing tool, has increased the popularity of magazines for male men, allowing the writers focus on male dominated interests, like cars sports and women. However certain magazines like Top Gear can be accessible for women although there market has a very high male audience. For my English Project we have been asked to investigate a particular use of language. I have chosen to look at the content and style of two different stereotypical men's magazines and to how they reach there target audience. I am going to look at whether the style of the article changes depending on what age it is being advertised to. I will be focusing mainly on the 'male language' used in the articles, how the author tries to make it appeal to its target audience. The depth of the content and it style. Data description I will be looking at two magazines, which stereotypically would have a male audience. An article from a 'Top Gear' magazine and one from a 'Classic Cars' Text A is a personal opinion and general review of the Porsche 911 GT3. The article on the Porsche 911 GT3 written by Jeremy Clarkson was obtained from a motoring magazine 'Top Gear'. Being a motoring magazine it clearly defines its audience as those who are interested in cars, which is what top gear revolves round. ...read more.

Other nouns that are found often are all hyponyms under this theme, like 'tyres', 'wheel' and 'gearbox'. This car semantic field also links back to the content and the context of the article and lets the reader know what the main topic of the article is. The article also has a semantic field of murder and killing as this will attract his target audience and again sums up the male psyche. The author is trying to link the semantic field of the article with the car and that it can be extremely dangerous. It builds up a sense of fear and associates it with the car. Common nouns like 'murder' and 'death' gives these connotations. Furthermore the use of 'villain', 'terrorist' and 'brainchild' all give negative connotations. In essence it brings out the dark side in the car, the use of terrorist give connotations of violence and killing, whish goes with the semantic field of the article perfectly. Moreover 'brainchild', implicates cloning of something. In this context emphasises the darkness in the article, it associates it with Hitler and makes it a product of his thinking and work, therefore as Hitler was seen to be evil this would mean the same for the car. Doing this it makes thae article much more interristing, and helps entertain the reader by using, non-significant but very contreversial and interesting topics. Clarkson also uses a few similes '...but I find them as emotionless as limestone'. He uses very vivid associations. This simile attaches negative connotations, he's giving his opinion on how he feels about the car, that he thinks it's not very exciting and the cars themselves (as he is talking about Porsche in general) do don't jump out at the reader as may other cars do. Also he uses a simile to describe the car, 'a spoiler big enough to serve as a landing strip for a small aircraft.' ...read more.

It can also be said this type of article can be seen merely as entertainment for, and an escape for, the heterosexual male. Text B, however is aimed at someone who appreciates car and is interested in being part of something important, it may not interest the wide audience but however it brings about class and sophistication that Text A doesn't come close to. Evaluation All in all I felt my investigation was a successful one; as I went on to prove my aims although there were many aspects that I could've improved upon. I felt I could have improved on time management, as I should have focused on the aspects that I felt I had to write about, and not have started to annotate the whole article, which was very time consuming. The investigation is not a full representation of men's car magazines, which means the analysis may not be totally fair as it only looks at a few magazines out of a very long range. I could have taken a larger sample and used more magazines, with differentiating characteristics like Nuts and GQ, which give a different view on men's products than both these magazines. This would have allowed me to have a much broader and fair analysis. These would've been targeted to a different audience, although it may have been time consuming. A further investigation could be done contrasting articles written by male and female authors, possibly about cars or maybe branching out to other products. This was the first idea that I thought up, however it was extremely difficult to find a car review in a magazines, written by a women for women. It would be interesting to see what king of language each of the authors use to appeal to a certain audience, and how women and men review cars. ?? ?? ?? ?? English Language Mohammed Imran Daji ...read more.