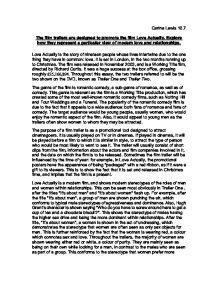 Carina Lewis 10.7 The film trailers are designed to promote the film Love Actually. Explore how they represent a particular view of modern love and relationships. Love Actually is the story of nineteen people whose lives intertwine due to the one thing they have in common: love. It is set in London, in the two months running up to Christmas. The film was released in November 2003, and is a Working Title film, directed by Richard Curtis. It was a huge success at the box office, grossing roughly �25,166,894. Throughout this essay, the two trailers referred to will be the two shown on the DVD, known as Trailer One and Trailer Two. The genre of the film is romantic comedy, a sub-genre of romance, as well as of comedy. This genre is relevant as the film is a Working Title production, which has created some of the most well-known romantic comedy films, such as Notting Hill and Four Weddings and a Funeral. The popularity of the romantic comedy film is due to the fact that it appeals to a wide audience: both fans of romance and fans of comedy. The target audience would be young people, usually women, who would enjoy the romantic aspect of the film. Also, it would appeal to young men as the trailers often show women to whom they may be attracted. The purpose of a film trailer is as a promotional tool designed to attract cinemagoers. It is usually played on TV or in cinemas. If played in cinemas, it will be played before a film to which it is similar in style, to attract the type of person who would be most likely to want to see it. The trailer will usually consist of short clips from the film, information about the actors and film companies involved in it, and the date on which the film is to be released. ...read more.

Another reason for this setting is that it contributes to the traditionally romantic theme of the film. Love is generally expected to happen in a "fairy-tale" romantic area, rather than somewhere more realistic such as Brixton market. These stereotypes provide the perfect set-up for all sorts of traditional relationships, such as the "rags-to-riches" story. However, these are very much fictional situations and not likely to occur in real life. Another, though less obvious, form of stereotype is the stereotyping of certain actors. If an actor plays one type of role for too long, society may type-cast him into that role and he may find it very difficult to play anything else. The most obvious example of this is Hugh Grant, who plays the leading male in almost every Working Title film. These roles include Notting Hill (as William Thacker), Four Weddings and a Funeral (as Charles), and Two Weeks Notice (as George Wade). In each of these, the role is essentially the same: the bumbling, middle-class gentleman who is in love with a girl but too shy to tell her. This gentlemanly image is reflected in his personal life, growing up in suburbia and winning a scholarship to Oxford university. Using Hugh Grant as a lead character also has obvious advantages: the image of the stereotypical English man is exploited to further appeal to Americans with an interest in British culture. However, Martine McCutcheon is portrayed very differently. After a role in Eastenders, she progressed onto the West End with the role of Eliza Doolittle in My Fair Lady before appearing in her first film, Love Actually. In each of these, she is depicted as a typical East End girl who suddenly rises to riches thanks to some benefactor, in these cases Henry Higgins and the Prime Minister. This too mirrors her real life story, in that she was a typical girl before becoming an actress and achieving fame. ...read more.

However, when juxtaposition has been used in these trailers (between the characters of Laura Linney and Rodrigo Santoro), all that separates them is a wall. This gives a comic effect, because although neither can see what the other is doing, the audience is able to see both. In this way, juxtaposition has been used to create a kind of soliloquy- with Laura Linney revealing her true feelings to the camera and no-one but the audience knowing. In addition, various framing decisions have been made by the director. For example, in the scene where the secretary attempts to seduce Alan Rickman, the shot used is a high angle shot. This attempts to show us what Alan Rickman would be seeing from his point of view. It also mirrors the stereotypical roles of men and women, as the woman is below and seems to have less power, while the man is above and more powerful. After watching these trailers, I would not personally have wanted to go and see the film, because romantic comedy is not a genre I would usually watch. However, after studying media and the techniques used within trailers, I have realised that more goes into the production and marketing of a film than I previously thought. Also, it has been shown that the media perpetuates many old-fashioned stereotypes, which is not what would be expected in today's multicultural society, especially in a film about modern relationships. Each trailer is littered with subjective views of love, presenting it as more fairy-tale like than realistic. Furthermore, the gender and racial stereotypes shown present London as nothing more than a one-dimensional stereotype. These stereotypes have not been created by Working Title films, but originated many years ago when woman was seen as "a man's possession", and the only non-white people in Britain were slaves. However, the trailers were not designed for realism, but to make money, and it is clear that they have achieved this, this being proved by the film's success at the box office, grossing over �25 million. ...read more.