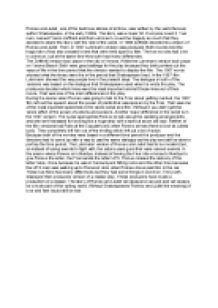 ﻿Romeo and Juliet, one of the best love stories of all time, was written by the world famous author Shakespeare, in the early 1600s. The story was a major hit. Everyone loved it. Two men, named Franco Zeffirelli and Baz Luhrmann, loved the tragedy so much that they decided to share the story with the rest of the world. In 1968 Zeffirelli directed his version of Romeo and Juliet. Then, in 1997 Luhrmann version was produced. Both movies told the tragic tale of two star-crossed lovers that were held apart by fate. The two movies had a lot in common, but at the same time they both had many differences. The Zeffirelli version took place in the city of Verona. ...read more.

The producers decided which lines were the least important and left those lines out of their movie. That was one of the main differences in the play. During the scene when Romeo was going to talk to the Friar about getting married, the 1967 film left out the speech about the power of plants that was spoken by the Friar. That was one of the most important speeches in the whole script and film. Without it you didn?t get the whole affect of the power of potions and poisons. Another major difference in the script is in the 1997 version. The nurse approaches Romeo to talk about the wedding arrangements and she isn?t harassed for looking like a huge ship with a sail but as an old lady. ...read more.

In the scene where Romeo is in Mantua, instead of having the Friar ride a horse to Mantua to give Romeo the letter, the Friar sends the letter UPS. Romeo missed the delivery of the letter twice. Once because he was in his backyard hitting rocks and the other time because the UPS man was walking up to Romeos? door when Romeo drove past him in the car. These two films had many differences but they had some things in common. They both displayed their producers version of a classic play. These producers have made a production of a classic. The story of Romeo and Juliet will always be around and will always be a main part of the writing world. Without Shakespeares? Romeo and Juliet the meaning of love and fate would still be lost. ...read more.