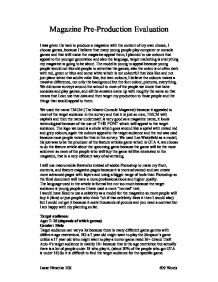 Magazine Pre-Production Evaluation I was given the task to produce a magazine with the content of my own choice, I choose games, because I believe that many young people play computer or console games and that will make the magazine appeal them, I planned to use colours that appeal to the younger generation and also the language, target marketing is everything my magazine is going to be about. The model is young to appeal because young people would not like old people to advertise the games, also the colours or often dark with red, green or blue and some white which is not colourful that kids like and not just plane white that adults mike like, but teen colours, I believe the colours makes a massive difference, not only the background but the font colour, pictures, everything. ...read more.

The logo we used is a circle which goes around like a spiral with mixed red and grey colours, again the colours appeal to the target audience and the red was used because most people voted for that in the survey. We used Lee Wakefield as a model, his job was to be the producer of the feature articles game which is GTA 4, we choose to do the feature article about the upcoming game because the game will be the most sold ever so most of the people who will buy the game will be interested in the magazine, that is a very efficient way of advertising. ...read more.

but I could not get it because it costs thousands of pounds and you need a contract but I am happy with my planning so far. Target audience: Age: 7- 25 (depends of which games) Gender: Male Target audience can vary a lot because there is many different game genres with different age restrictions. EG a 7 year old might want to play the Simpson's game unlike a 17 year old who might want to play a horror game rated 16+ Grand Theft Auto 4's target audience is mainly 18+ because that is the age restriction but actually there is a lot of people under 18 who play it, (about 30% of the people who got GTA is under 18) So it is difficult to find the target audience for the specific game. ?? ?? ?? ?? Lasse Nitschke 10S 609 Words ...read more.