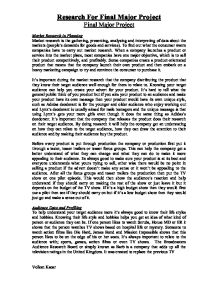 Market Research in Planning Market research is the gathering, presenting, analysing and interpreting of data about the markets (people's demands for goods and services). To find out what the consumer wants companies have to carry out market research. When a company launches a product or service into the market place, most companies have one major objective, which is to sell their product competitively, and profitably. Some companies create a product-orientated product that means that the company launch their own product and then embark on a heavy marketing campaign to try and convince the consumer to purchase it. It's important during the market research that the company distributing the product that they know their target audience well enough for them to relate to. Knowing your target audience can help you create your advert for your product. It's hard to tell what the general public think of you product but if you aim your product to an audience and make your product have its own message then your product would have its own unique style, such ...read more.

If it's a high budget show then they would first use a pilot then see if they should carry on but if it's a low budget show then they would just go and make a sense out of it. Audience Data and Profiling To help understand your target audience more it's always good to know their life styles and hobbies. Knowing their life style and hobbies helps you get an idea of what kind of person or audience they can be. If one person likes to watch Scrubs, House MD or ER it shows that the person watches TV shows based on hospital life or mystery. Someone to watch action films like Die Hard, James Bond and Mission Impossible shows that this person likes to be on the edge of his or her seats. It's always important to relate to the audience with; sports, games, action films or even TV shows. The Broadcasters Audience Research Board or simply known as Barb is a company that adds up all the television ratings in the United Kingdom. ...read more.

How research would help both companies differentiate from each other but still sell the same categories of clothes like sport ware is by their target audience. Adidas's target audience would be more to a younger age group and would focus on the fashion more then actually the sport ware itself when Nike would focus on the sports ware and their target audience would be for all ages. How important is market research to the advertising industry? It's important for a company that's releasing their own product to make it different. Making their own product has the same effect but has its own message mailing the product more unique and more to an audience. In all media companies and categories; journalism, film, news or products, it all needs advertisement. Every TV show needs advertisements and every film or new release of songs needs adverts. Its one of the most key source of income for the company, without advertisement the public won't know what to get or see. ?? ?? ?? ?? Research For Final Major Project Final Major Project Volkan Kacar ...read more.