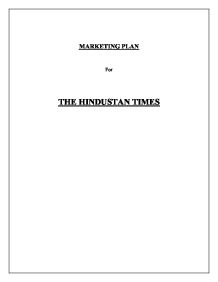 Marketing plan for the Hindustan Times.

MARKETING PLAN For THE HINDUSTAN TIMES Marketing Plan I.Executive Summary. Hindustan Times was incorporated in the year 1901. It is owned by the K K Birla group. It has the largest leadership in North India. It is the 6th largest English language daily newspaper circulation in the world. Hindustan Times is the Third largest circulated English newspaper in India. It has been Delhi's largest circulated paper till recently. It has been loosing its market share to Times of India. Hindustantimes.com has for the second consecutive year become the only Indian website to figure in the Forbes List of Best Foreign newspapers and retained its 7th rank for excellence in design, content and originality. II. Industry Analysis. India is the world's largest democracy, a land as rich in history and diversity as it is vast in size and population. The country's literacy rate is climbing; its population is over 1 billion. The news media in India is thriving. Newspaper circulation and penetration are growing rapidly and in the past few years independent satellite and cable television has exploded. Newspaper circulation in India is currently around 32 million copies daily. Television viewer ship is estimated at 300 million. However radio remains the most popular source for news and information. All India radio once government controlled reaches 97% of the population. Despite the rapid growth of electronic media Newspaper readership is steady and remains relatively inexpensive. ...read more.

STARS QUESTION MARKS CASH COWS DOGS On the other hand web sites and portals can be placed in "STAR" category where market is growing but share is low. HINDUSTAN TIMES was initially highly profitable for company but currently it is placed in "QUESTION MARK" category. Exhibit 3.1 SALES AND PROFIT TRENDS On analyzing the installed capacity of the company we can find that its capacity is constant over a period of 1997-2002. But as it is expanding in West and South very soon its capacity is bound to jump. Its sales come from mainly advertising and the newspaper copies sales. Major chunk of it is through Advertisement sales whose revenues have been increasing at the rate of 9.6 % CAGR (currently 337.67 Crore) and constitutes --% of total revenues. The revenues from newspapers grew impressively at the rate of 16.4% CAGR. In terms of total no of copies sold there is an increment of 6.2% CAGR for both its newspapers and periodicals. On comparing the data of last few years it is observed that inspite of increasing sales profit after tax of the company is declining steadly. One reason behind that is HT Group sales growth is not at par with overall market growth. And because of severe competition by TIMES OF INDIA GROUP, HT increases its marketing and distribution expenditure. As shown in table in last few years HT has increased its marketing expense by almost 16.4% CAGR. ...read more.