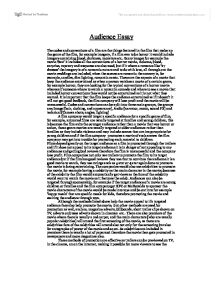 Audience Essay The codes and conventions of a film are the things featured in the film that make up the genre of the film, for example imagery, if a film was to be horror it would include imagery containing blood, darkness, monsters etc.. Scary images for example the movie 'Saw' it includes all the conventions of a horror movie, violence, blood, surprise, mystery and suspense are also used, but if it where a romance like '27 dresses' the imagery is of a romantic nature and to do with love, all through out the movie weddings are included, when the scenes are romantic the scenery is, for example, candles, dim lighting, romantic music. These are the aspects of a movie that keep the audience entertained as when a person watches a movie of a certain genre, for example horror, they are looking for the typical conventions of a horror movie whereas if someone where to watch a romantic comedy and where to see a movie that included horror conventions they would not be entertained as it is not what they wanted. ...read more.

Film companies not only use trailers to promote the film to its target audience but if the film has good reviews they use that to convince the audience it is a good movie to watch, they use ratings such as 5 star or 4 star again done to promote the movie in being entertaining. The companies would also use celebrities to promote the movie, for example having a celebrity as the main character in the movie; because of the celebrity the film would automatically get views as the fans of the celebrity would want to watch the movie as it features the celeb. Audiences can also be targeted through sponsorship, for example if the target audience of a movie are young children or families and the film company got KFC or McDonalds to sponsor the movie characters of the movie would be made into toys and be out into for example 'happy meals' that are specific meals for kids, therefore promoting the movie and exciting the audience through toys. Although the methods listed above help the movie appeal to it's targeted audience they also help promote the movie, but other methods are used for promotion as well, such as, magazine adverts, billboards, short trailer clips shown on TV, adverts on buses adverts shown in cinemas etc.. ...read more.

Movie posters are also greatly effective as they can be displayed at a variety of location, [in the tube, on billboards, at bus stops in magazines, on buses] The posters usually contain the main actress/actor as the centre image with eye-catching bold writing that stands out, the writing is will be of the name of the movie and maybe a catchphrase form the movie as well. If the poster is attractive, as it is eye catching this will make the viewer want to see the movie making film posters a successful and popular way of promoting movies. Film premiers are also a very popular form of promotion of a movie as because of the celebrity the amount of paparazzi will get the movie more known and into more magazines and as the celebrity as his/her own fan base the movie will gain fans/viewers through the celebrity. Fans will also come to the premier to get autographs from their favourite movie star which again promotes the movie because the autographs would most likely be on a poster of the movie. Through all these different forms of promotion the movie will have a wider audience as more people will hear of the movie as it is being promoted so widely. ...read more.