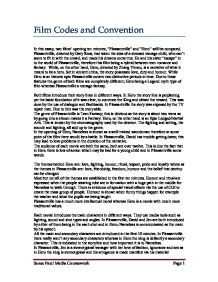 Film Codes and Convention In this essay, two films' opening ten minutes, "Pleasantville" and "Hero" will be compared. Pleasantville, directed by Gary Ross, had taken the idea of a stressed teenage child, who can't seem to fit in with the crowd, and made his dreams come true. He and his sister "escape" in to the world of Pleasantville, therefore this film being a hybrid between teen romance and fantasy. While, on the other hand, Hero, directed by Zhang Yimou, is a narrative of what it means to be a hero. Set in ancient china, the story possesses love, duty and honour. While Hero is an historic epic Pleasantville covers two distinctive periods in time. Due to these features the genre of both films are completely different; Hero being a Legend myth type of film whereas Pleasantville a teenage fantasy. Both films introduce their story lines in different ways. In Hero the story line is perplexing yet the basic foundation of it was clear, to convince the King and obtain the reward. This was done by the use of dialogue and flashbacks. In Pleasantville the story was exposed by the TV repair man. Due to him was the story able. ...read more.

Dark navy colour schemes are also conventions of historic epics. In both movies colour is used to create exceeding effects. In Pleasantville colour is used to portray the idea behind a character, as soon as the character changes their whole colour changes. In Hero colour is used to emphasize the feeling behind the thought or belief. An example of this would be that the colour was red when the two women were fighting; they were fighting for love and red is a connotation for love and blood, whereas in the King's theory the colour was blue. Blue is the connotation for cold, callousness and heartlessness. This technique is very effective to help the audience of the film understand its narrative. In spoken words many people believe that Hero is more effective in its use of colour. This is true as the colours values and the actor's actions both match. This happens in Pleasantville also, yet for a complex narrative like Hero, colour used in this way was an effective tool. Sound, in both movies, is used to build tension and set scene. In Pleasantville, in the first scene, a huge clue is given about the setting of the narrative. ...read more.

Power is basically the foundation of historic epics. To conclude both films conform to their genres particularly well. Personally, it is believed that Pleasantville was a much more explained opening however more suspense and mystery was created by Hero. The weakness of Hero was that it was too complicated. The movie which is preferred however is Hero as it is been finely directed as well as the fact that the use of colour was more effective in this movie over the other. They both have different impacts on their target audiences. While Pleasantville's calm story about two teenagers may not affect the adorers of Hero, views who don't mind the fantasy genre can curl up and enjoy two hours of black and white "fun". Likewise the target audience for Hero may find Pleasantville interesting but too simplistic and surreal for their Sunday nights. Jet Lee in hero is used as part of "the star system". Certain film stars can be an important part of the film's iconography. Jet Lee is used to highlight the films genre and martial aspects. Many people say Jackie Chan would have been a better choice however he is now mainly associated with comedies. The casting team made a great choice choosing Lee. ?? ?? ?? ?? Sanee Patel Media Coursework Page 1 ...read more.